"Machine Gun Preacher" is the true story of Sam Childers, a man who takes on a role many forfeit. The role of a protector, a hero.
Sam Childers (Gerard Butler) doesn't start out as a knight in shining armor, as an ex-con, he's practically the very opposite. But, upon finding religion, his views on life change. After volunteering for a spiritual mission in Africa, Sam finds a world of horror. Entire families slain, children forced to become soldiers, children brutalized and plunged into darker and darker depths with each passing day. Sam immediately decides to take action and plans to build an orphanage, a home for these children. Right away, the LRA (the so-called "Lord's Resistance Army) destroy his first attempts. However, urged on by his wife, Lynn (Michelle Monaghan), Sam decides to begin again, going a step further and taking the war to the LRA.
What is beautiful about this movie is the message. Despite horrific scenes and blunt violence, there is a sense of hope enveloped within. The audience cheers Sam on as he struggles and sacrifices to save the children in danger, putting himself directly in the line of fire. Having witnessed some of the trauma experienced by the children, it's easier to smile when these same children are seen laughing or thwarting Sam in his attempts to teach them baseball.
However, there's something missing in this portrayal of an immensely complicated and inspiring story. Throughout this film, I felt like a string, pulled to breaking point. But, I was never led there. I wanted this movie to break me, to turn me inside out and it didn't. At times, it felt too rushed. There were important moments and details that were quickly flashed on and off the screen without allowing the viewer time to properly digest and contemplate them. At one point, Sam is in danger of losing his home because he's investing all of his money and assets into the orphanage. It's a moment full of dramatic potential where you have one man torn between having a home for his wife and child or, keeping the orphanage he has built in operation. It was disappointing to see such a profound situation sloppily taped and glued together. There was a gaping need for more emotion, more feeling to the movie. Gerard Butler did the best he could with this role. To look at his mannerisms, his eyes, the subtle feeling in his voice is to believe in him as Sam Childers. This movie had the most noble intentions, it's heart was in the right place. Yet, it never truly found its beat. I wish it had been a documentary since when you finally do get to see Sam Childers when the credits roll in, you become enthralled. Though he's no handsome actor, there's an immense appeal to him, a genuineness, a solidity that is hard to glance away from. The few comments he makes are blunt and honest, there is a soldier's careful look about him. The children he has saved gather around him like he is their father (and he is), their scarred faces glow with true smiles. Those few minutes of reality made me cry more than any other scene in the movie. I am looking forward to reading his words and thoughts in the book, "Another Man's War." Though not perfect, I am grateful to this film for allowing me to see great truth and feel greater hope. 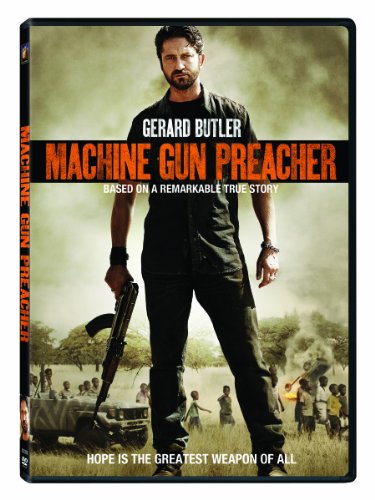 
Buy from Amazon Available on iTunes
The author's comments:
If you decide to see this movie, don't be quick to judge. Think about it and place yourself in the shoes of others.
Post a comment
Submit your own