Indiana Jones and the Kingdom of the Crystal Skull | Teen Ink

Indiana Jones and the Kingdom of the Crystal Skull

I'm a huge movie buff, as i watch just about every kind of film in every genre, but the one series that i gre up with and still look at that showcases my childhood hero is the Indiana Jones saga. Never before had i seen something so incredible and groundbreaking as Raiders of the Lost Ark, and watching the two sequels not long after changed my perspective on the world. In late 2006, when the teaser trailer was released for Crystal Skull, my anticipation exceeded the boundaries; i had to see it as soon as possible. When i did, i was not disappointed; not one bit.

The Kingdom of the Crystal Skull revolves around a retired Indy, who now teaches at Oxford and is out of the night-life of being a "rogue archeologist." But when a boy named Mutt Williams comes to get Indy's help with finding his mother, Indy is thrown into an adventure that he hasn't experienced for years.
For REAL fans of the Indy series (not the haters or trolls) who know that this installment was just absolutely incredible, i adore you. For the haters and trolls who call yourselves fans, let me enlighten you; this movie was spot ON with the story. Indy is going to get older, he's going to fight a new enemy (since WWII is over and gone) and there are different myths and legends that he's going to experience first hand! The big reveal was not too over-the-top or lame because it goes with the story perfectly; it's a mythical/legendary object that has untold power. So did all the other artifacts! There is no TRUE difference. So, next time you hate on Indy, just know you're not a fan. All the films are amazing (Temple of Doom being the most over-the-top) 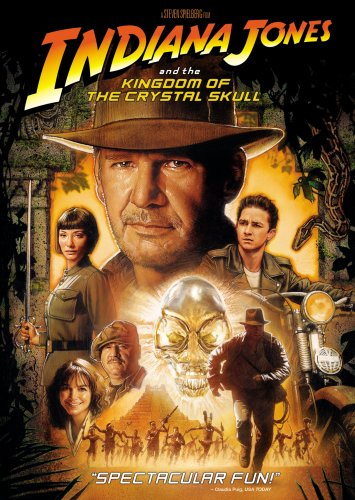