In the past few years, Disney has rebuffed old fairytale favorites to fit modern standards. Long dead are the pale, weak princesses who sit around waiting for Prince Charming to slay the dragon and save them. Tangled—Disney’s woman-empowering spin on Rapunzel—features a frying-pan wielding heroine with a sassy chameleon (Pascal) as her companion. With only one dream (to find out what the strange lights in the sky are that appear once a year on her birthday) Rapunzel sets out from the tower for the first time with the notorious thief Flynn Rider when her “mother” (Gothel) leaves town. On their journey, they encounter mug shots of Flynn with wrong noses, a horse named Maximus with a vendetta against Flynn, some singing pub guys, and the truth about the lights, not to mention magical hair, true love, and an evil rejuvenating witch.
The animation in Rapunzel is well done, as is the story line with all the quirky twists like the fact that everyone seems to uses a frying pan as a weapon, and the healing power of Rapunzel’s hair that can never be cut. Despite being animated, this movie can be enjoyed by the whole family. As films go, I think this is one of Disney’s finest, putting some of the older fairytales to shame because of their sexist views of women. Tangled had me rolling on the floor laughing in the theatre, and quoting lines from it even three months later. A must-see, all bang-for-its-buck movie, Tangled will forever be one of my favorite fairytales of all time. 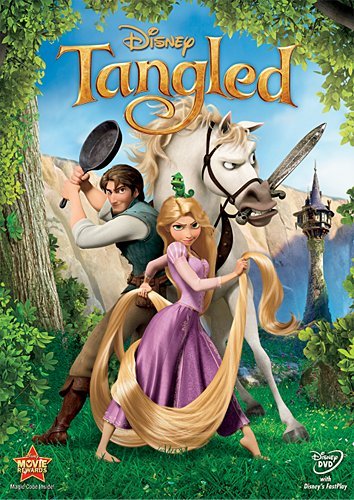