Glee was a hit from the moment we fell in love with Rachel, Finn, Kurt and the gang. They are all underdogs. Bullied, made fun of and never given the chance to show what they have in them.
In two seasons, Glee won over 65 awards and has been nominated for 170. The show has more than nine million viewers worldwide. For many people they are the best of the best.

Some might think that Glee is a cliché, perhaps a copy of High School Musical. That is were they are wrong. Each character has his or her problems whether it's at home or in school. Getting slushied in the face each and every day just proves it.

Glee : The 3D Concert Movie is a treat. Like Christmas in the middle of summer. Fans who can't go to a concert get to see their favorite actors on stage and on the "Big Screen".
In between songs, testimonials from teens and adults whose lives have been changed since the show aired in 2009 bring smiles to our faces.

The Glee movie is a must see! Great music, promised laughs and everything about this movie will leave you feeling better about yourself. We are all underdogs and that is what Glee celebrates.
The loser in us ! 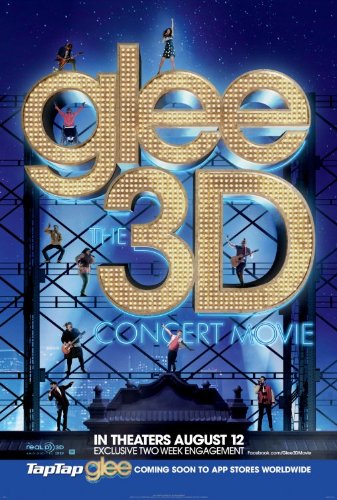