Jon Favreau’s “Cowboys and Aliens” is two kinds of films in one. A western film and an alien film. It fails as both.

It fails as a western because every aspect of it isn’t believable beyond a typical western reenactment. The leading actors give their usual performances, except in cowboy outfits and southern accents. Daniel Craig is a hybrid of his “James Bond” performance and Jason Bourne. Harrison Ford is his usual cheesy, old-age Harrison Ford. The screenplay by Roberto Orci, Alex Kurtzmen, Damon Lindelof, Mark Fergus, and Hawk Ostby gives the actors nothing but clichéd western movie dialogue to spout.

It fails as an alien picture because the aliens don’t provide much wonder or mystery for the audience (as they do in the best alien movies). Instead, they are there primarily to kill and be killed (as in the worst kind of alien movies, like “Battle LA” or “War of the Worlds”).

Craig plays Jake Lonergan, a good-looking cowboy who wakes up in the middle of the desert one day. He can’t remember his name or where he came from but he sure can remember how to beat up people.

One night when he’s been caught by the local law enforcement, trouble comes to town in the shape of extra terrestrial spacecraft filled with large, bug eyed aliens who have come to earth for gold. After completely messing up the place and taking people captive, a rescue posse is formed, led by a tough as nails Colonel named Woodrow (grumpy, growly Harrison who, of course is trying to find his son).

The others include: Ella Swenson (a wide eyed Olivia Wilde) a good alien in human form. A bartender played by Sam Rockwell and some other guys you don’t care about. Jake also decides to come along…why? Because he’s the only one that can actually kill an alien, thanks to a super awesome alien bracelet gun that he can control with his mind! And also he’s had previous encounters with the E.T’s before, or whatever.

Favreau deserves some credit. From this and his last two features “Iron Man” and “Iron Man 2” he’s shown that he can direct a slick action film. Some of the battle scenes look great, (in particular the one at the beginning when the aliens are first introduced) and the special effects are consistently good. The only thing this movie partially succeeds at is being an energetic summer, adventure fantasy.

Even so, the action, no matter how good it is, is pointless if the story isn’t good, and that’s the case with “Cowboys.” Favreau moves the plot along so quickly that there’s no time for much character development; therefore you don’t have any emotional resonance towards any of the characters if something happens to them. Who cares if Jake had a girlfriend in the past that was killed by the aliens? Who cares whether Woodrow finds his damn son? In fact when the film gets to the rescue mission (and it’s pretty quick), it follows the same old formula: Aliens attack; they run into a group of people. More aliens attack; they meet more people and what’s the payoff? They defeat the aliens and rescue captives that we have maybe only seen once or twice before? Whoops, I gave away the ending. Surprise.

Not surprising is that the film is based on a graphic novel by Scott Mitchell Rosenberg. The title alone is a giveaway. Maybe this premise looks good as a comic but on the screen, with nothing but comic-book good guys and bad guys, it proves to be another tiresome action flick that disappoints in both its genres. 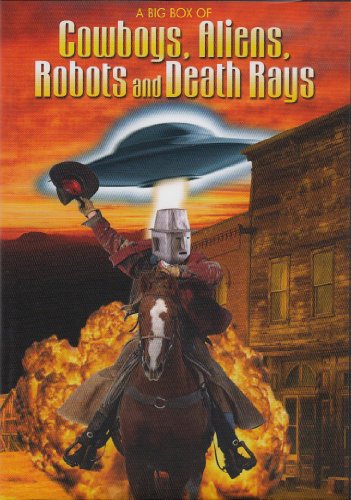 Favorite Quote:
"Life moves pretty fast. If you don't stop and look around once in a while, you could miss it." ~Ferris Bueller