Award-winning Gosford Park uses the timeless murder-mystery outline of Agatha Christie’s novels and embellishes it with all the colour of its radical take on the rigid upper-class/ servant-class division of 1930s England. It is said to be director Robert Altman’s best movie due to his unique filming and sound techniques that cause the viewer to feel a part of the story. It was written by successful actor, presenter, novelist, director and Oscar-winning screenwriter, Julian Fellowes. Gosford Park features an all-star cast including Maggie Smith, Helen Mirren, Clive Owen, Emily Watson and Ryan Phillippe, to name a few.

The story’s setting is a 1930s, English country manor house. William McCordle (Michael Gambon), the man of the house, has invited many friends for a weekend shooting party. Since he has gotten older, he’s saved up a fortune, which everyone seems to want a piece of. When he is murdered, suspicion is on all, upstairs and below, in the servant’s quarters. Secrets, lies and guilty pleasures are a plenty and, with incompetent Inspector Thompson (Stephen Fry) on the case, finding the truth is left to outsider, Mary (Kelly MacDonald), a ladies’ maid.

This sparkly, witty drama has exquisitely chosen music that keeps the movie flowing from subplot to subplot. Every line could be a notable, humourous quote, well pulled off by famous actors who get into their character with ease and grace. The scenery, props and costumes used are all relevant, important factors in creating a stunningly authentic atmosphere that keeps the viewer intrigued at all points. Gosford Park is truly a fabulous movie that many would enjoy. Here’s a taster: 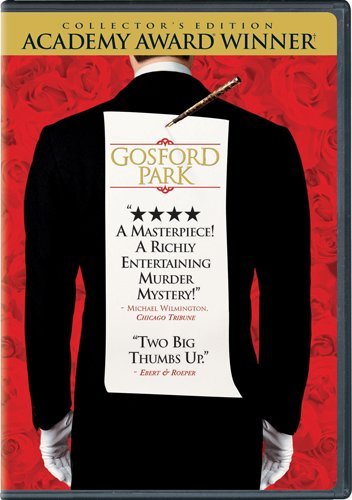 
Buy from Amazon Available on iTunes
The author's comments:
Not an in-depth review, but trust me the film is brilliant - very Julian Fellowes.
Post a comment
Submit your own