Government agents trail an assassin out a building, down a street, and below ground to a deserted subway platform. There are four, but as they close in, their target unleashes murderous hell, pummeling them like rag dolls. The scene is pure, punishing adrenaline, but what makes it truly remarkable is that it was all shot in one long take. Indeed, this technical flourish lends much to the effect. “Hanna,” quite the change from director Joe Wright's previous period pictures, is an action film of true aesthetic integrity, and one of the best thrillers in recent years.

“Hanna” opens in the white-washed wilderness of an unnamed forest encased in snow. Enter Hanna (Saoirse Ronan), a steely-eyed girl whose arrow fells an elk and whose ferocity is impressive and intimidating. She lives in isolation with her loving but tough father, Erik (Eric Bana), who acts as her drill sergeant in preparation for an unknown task. She memorizes an array of fake aliases and becomes fluent in many languages. Day in and day out, she spars with Erik on the plains of glaring ice.

Then the fateful day arrives when Hanna finds Erik sitting behind an unfamiliar switchboard device. He gives her a choice: continue living her life as it is or flip the switch if she believes she is ready for the task her training has been in preparation for. Of course, Hanna flips the switch. Her ­father, now clean-shaven and packed, bids her farewell and leaves.

That night, Hanna is transported to a government facility. All her years of training are not for nothing: she escapes. Outside, Hanna is pitted against
the alien world and a posse of government hit men. She has but one goal: to find out who her father really is, what he is involved in, and her role in it.

“Hanna” marks a compromise between the Hollywood action flick and the art-house thriller. Here is a film that unfolds at a breakneck pace, sprinting past well-worn conventions with assurance to reach its ultimate destination: a strange derivation of a genre we thought we knew.

The assassin's plight has been a generation favorite, made universally popular with the Bourne trilogy and the recent James Bond reboots. But “Hanna” is a separate entity, violent and breathtaking, barely contained by its flimsy PG-13 rating. The action here is finely captured yet merciless. The ­editing is almost flawless, a measured combination of machine gun montages, scattered jump cuts, and exhilarating long takes. Gone is the filmmaking fetish of the handheld approach, instead replaced by a varied visual style that stays refreshing for the entire movie.

Unique to “Hanna” is a pitch-perfect soundtrack by the Chemical Brothers, who use new era instruments to cover a spectrum of musical genres. “Hypnotic” is the best word to describe it. With editing and soundtrack complementing one another, this movie is keen on cinematic tempo and fires with grim energy.

“Hanna” deals its winning hand by weaving a fairy-tale subtext into its action-thriller roots. The theatrical trailer ­implies that much with its knowing “Once upon a time” reference. Director Wright inserts tidbits of allusive fairy-tale iconography to generate a surreal experience. Isolated for 16 years and thrust suddenly into civilization, Hanna becomes a contemporary Alice, with the world as her morbid wonderland.

The climax of the film depicts a savage cacophony of violence that marks Hanna's rite of passage into darkness. It is a cynical contemplation of the human condition as a tragedy, and in the end, all that is left is a helpless girl lost in the woods. 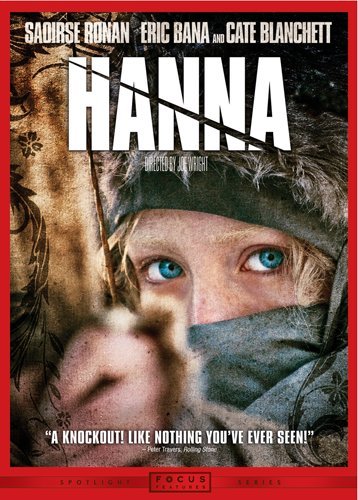