He's Just Not That Into You | Teen Ink

He's Just Not That Into You

"He's Just Not That Into You" takes you into the love lives of Gigi, Conor, Alex, Beth, Janine, Neil, Ben, Anna, and Mary, who are all connected to each other in some way or another. No matter who they're connected to, they all share one thing in common: love problems. Beth and Neil have been dating for seven years, they live together, and Neil still hasn't popped the all-important question which is starting to irk Beth. Ben and Janine are happily married until Ben meets Anna and has a sudden affair with her. Not to mention that Conor is also in a relationship with Anna. Conor sees it as a relationship, but Anna sees it as a used-to-be-relationship-now-friendship. And Conor doesn't understand how Anna feels about him. Gigi is a desperate soul whose over-bearing personality tends to scare off guys like Conor. She feels like a hopeless case until she meets Alex, the friend of Conor-who never called her back after their first and only date. Alex is Gigi's walking guide to anything and everything dating, helping her to navigate the waters of love as he gives her all of the do's and don'ts. Mary is Anna's friend who has a relationship of her own with a guy she met on myspace. Mary finds out that even cyber-dating has it's own glitches; especially when she finds out that her cyber-boyfriend is cheating on her. Will Beth and Neil ever get married? What will happen to Ben and Janine's marriage when and if Janine finds out about Ben's affair? Will Conor and Anna's relationship ever be restored to its original state? Will Gigi, Mary, and Alex ever find their perfect matches?

"He's Just Not That Into You" brings fictional characters with real, true-to-life plots that make it more than just your regular movie; it's a mirror. A mirror for all of us who have been in a dead end relationship, been on those "don't-call-me-I'll-call-you" dates, and have just plainly failed in the world of love. As the characters try to console each other through the bumps in their respective relationships, they end up creating a hand book for us viewers out of the mirror that we've been looking through for the past few scenes. Their dialogue makes us realize that all of those stories that our friends tell us about other people's relationship struggles are told for a secret reason, and their dialogue also helps us realize who we really are: the rule or the exception. It's a movie that everyone from every walk of life and gender can understand and agree with after having a bout in one of the many relationship battles that this movie covers. With an awesome, all-star cast that includes Jennifer Aniston, Drew Barrymore, Ben Affleck, Kevin Connolly, Jennifer Connelly, Bradly Cooper, Ginnifer Goodwin, Justin Long, and Scarlett Johansson, this is one movie that you'll just want to cry at breakup aftter breakup and laugh at when you finally get to sit down and watch this with the one that says, "I'm just THAT into you." Enjoy! 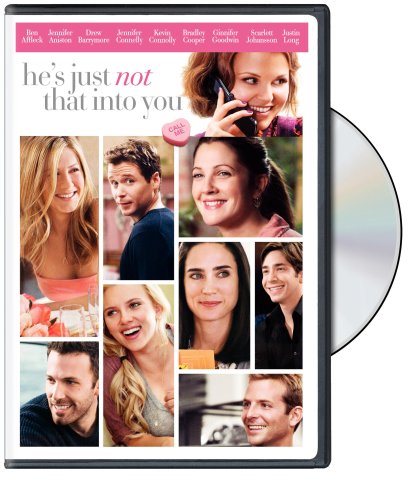