The Mist was defineltely an original movie. It was based on the book "The Mist," written by Stephen King. Stephen King is known for his creepy and suspenseful movies, and that becomes obvious in this movie. The movie is basically all about the mist being evil and all
-and in the mist, there are monsters that try to kill everyone. The main character David Drayton (played by Thomas Jane), plays the character of an artist who gets locked up with a bundle of people when the Mist hits the town. The bunch includes characters, Mrs.Carmody (played by Marcia Gay Harden,) Amanda Dunfrey (played by Laurey Holden), Brent Norton (played by Andre Braugher), and Ollie Weeks (played by Toby Jones). Mrs.Carmody is the cycopathic nut job who claims all the happenings to be works of higher powered religious figures. Amanda Dunfrey is a teacher that plays a big role in "The Mist." Brent Norton is the resentful neighbor of David Drayton and he will do anything to get people to go against David. Ollie Weeks is a friend of David Drayton, and worker at the store that they all are locked up in. Throughout the movie, they see tons of mutated monsters and animals that they try to fend off-only to find themselves in another horrible situation. The movie was generally good, but it was a little confusing. My suggestion to anyone who wants to watch the movie, is for you to skip the ending. The ending is the WORST part of the movie. The movie was all good until the end-but I guess it is typical for a Stephen King's book to end like that. Overall, I think everyone should watch the movie if they like suspenseful movies. 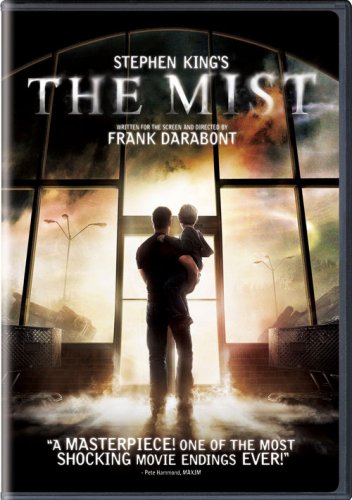 View profile
your review was good, but i don't get why it confuses you (the movie, i mean). to me, it was pretty straight foreward. and as far as the ending goes, to me, it was the best part. of corse it was sad, but it was so powerful and had a deep meaning to it. anyways, that is just my opinion. you might like the novella better than the movie because it doesn't have the same ending; it was the director's idea, not Stephen King's. but good job again!
Ambie BRONZE said...
on Mar. 5 2010 at 10:29 am
Ambie BRONZE, Millville, Pennsylvania
4 articles 0 photos 43 comments

Favorite Quote:
I'm a woman of my convictions call me wrong call me right but I bring my better angels into every fight.

View profile
Great piece of work. I would recommend anyone to read this. Very well written. I enjoyed this :)
Ambie BRONZE said...
on Mar. 4 2010 at 6:13 pm
Ambie BRONZE, Millville, Pennsylvania
4 articles 0 photos 43 comments

Favorite Quote:
"Don't cry because it's over. Smile because it happened." -Dr. Seuss

View profile
The way you described the movie reveals enough to make me want to watch it but not too much where I now know the ending. I loved the play on words "-and in the mist". Keep writing! (:
Ambie BRONZE said...
on Mar. 4 2010 at 8:14 am
Ambie BRONZE, Millville, Pennsylvania
4 articles 0 photos 43 comments

View profile
Can you guys keep looking out for my other stories, I have two pending approval called, Frozen Fate, and Portrayer.