Drag Me to Hell | Teen Ink

Drag Me to Hell MAG

Favorite Quote:
"If knowledge is the key then just show me the lock"- Q-Tip from A Tribe Called Quest

I recently watched the 2009 horror movie “Drag Me to Hell.” It has an ordinary horror movie plot: successful woman trying to rise to the top of her job makes one mistake at the wrong place and time and BAM! – she is possessed by some demon and has three days to live. However, that is about as typical as this movie gets.

Directed by Sam Raimi, who has been known to combine dark humor with authentically scary situations, “Drag Me to Hell” follows a completely different path than most current horror movies. It does not fit the ordinary equation of tons of gore plus half-naked, terrified young women chased by psychopathic maniac equals young audience with extra cash to spend. Raimi, instead, follows the beat of his own drum.

The movie begins in California in the '60s with Shaun (Adriana Barraza), a young psychic, trying to exorcise a boy from the demon that possesses him. The exorcism fails, and the demon drags him to hell.

Fast-forward to today. Christine (Alison Lohman) is a young woman trying to succeed as a loan officer, battling the new guy for the assistant manager's position. She has to make a tough decision to earn the job, and in the process she evicts an old woman, Sylvia (Lorna Raver), from her home. Sylvia turns out to be the demon in disguise. Christine is possessed and terrorized for three days until, inevitably, the time comes for her to fight for her life, with help from Shaun.

As a fan of horror movies, I can be very picky. Rarely are good horror movies released nowadays, but I thought “Drag Me to Hell” was an instant classic. Though it is less popular than other recent horror flicks like “Sorority Row” or “A Haunting in Connecticut,” I would recommend it over either of those.

So, next time you are in the mood to laugh out loud, cringe, or do both simultaneously, grab this movie, some friends, and a stable place to sit; you will need it for the edge-of-your-seat excitement this movie provides. 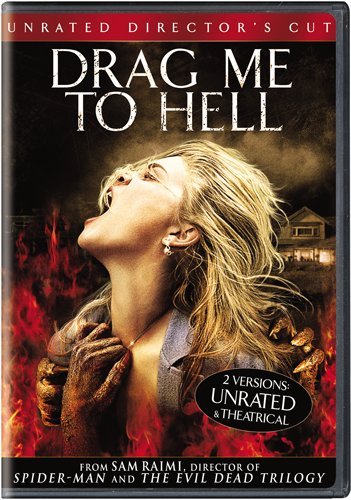 View profile
Sam Raimi is one of the most versatile directors of all times. It's hard to believe that he did the Spider Man franchise and one of the bloodiest horror franchises of all time.