Sito and Piet Kroon (animation segments), is one

spoonful of sugar that will help the bitter

down. Both funny on many levels and biologically

concerned and correct, it is, by far the best

It centers around Frank (Bill Murray), who is a

human garbage disposal who eats like Wimpy on a

bad day. He works at a zoo, where, in the opening

scene, he wrestles his hard boiled egg out of the

mouth of a chimp and eats it off the floor, much to

the distress of his young daughter Shane (Elena

Franklin). Much of the live action scenes,

pale in comparison to the (tehe) heart, lungs and

brain of the movie, the animated portions.


From there is where the fun begins. As Frank

the film goes animated to show us the

“City of Frank”, which is a thriving metropolis, full

of anatomical puns, such as the armpits being a

highways, the Love Handles being a growing ghetto

area and having a statue of the “founder” of Frank

in Cerebellum Hall, who is a sperm.

The screenplay by Marc Hyman is full of these and

many more jokes, So many that the movie requires

multiple viewing to catch all of them.

The city is much more colorful, interesting and

entertaining than any of the live action parts.

Osmosis Jones (voice of Chris Rock), is the

main protagonist of the movie. He is a white blood

cell who appropriately works for Frank PD, but has

been demoted to tartar control due to “reckless

behavior” we find out later. His partner is Drix

(voice of David Hyde Pierce), who is a cold pill who

has come to soothe the symptoms caused by Thrax

(voice of Laurence Fishburne) or the “Red Death” as

he is known. All of the voice work is flawless, from

both main and supporting characters. Every actor

adds a portion of their own personality to their

characters, while making them endearing

in the process. My four personal favorites being

Phlemming (voice of William Shatner), who wants to

stay in office by keeping Frank fat. “A fat Frank is a

Also noteworthy are the film's visuals inside Frank,

the wonderful message of “you are what you eat”

and, of course, Frank himself. The visuals, overseen

by Tom Sito and Piet Kroon, are very colorful and

detailed. They show the consequences of everyday

actions such as yawning or sneezing on the body.

You will never sneeze, yawn, fart or vomit the same

way ever again after seeing this movie.

Also, as lackluster as the live action is, Bill Murray

certainly gives it his all, turning Frank into a fat and

lazy, but lovable, character, even though the script

doesn't give him anymore to do than to be a human

throughout the movie. Kids and adults alike will be

sure to see things such as chicken legs and corn

dogs in a whole new light.

No matter what your doctor says, I recommend

exceeding dosage of this film. The wonderful

make this movie food for thought. 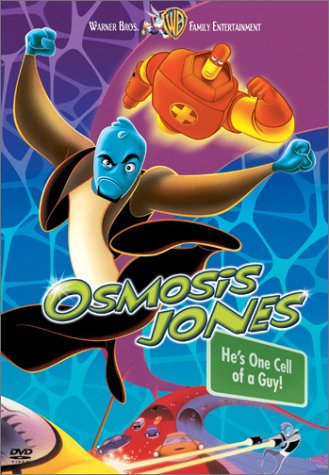