It is a rare occurrence for a film to manage to be at all times frightening, comedic, dark, interesting and beautiful. Rarer still is for that film to be successful in all it sets out to do. In 1989, however, Shinya Tsukamoto creates such an experience, far surpassing the big budget sci-fi movies of the time.

On the surface, the plot is fairly straightforward. We open with a man known as the Metal Fetishist, piercing himself with an assortment of metal scraps. After a while he feels the intensity of the pain, and runs into the street, where he is hit and killed by our protagonist, the Salaryman. The Salaryman eventually begins to transform into metal, wires and poles protruding from his flesh. The film ends with him and the metal fetishist joining together after a drawn-out battle between them.

Earlier, I referenced the film as an experience, which may be the easiest way to describe it. With twisted figures, revolting machines, and fascinating sounds, “Tetsuo” can easily be compared to Lynch's “Eraserhead,” or Cronenberg's “Videodrome.” The visuals created in this surreal entity are complimented by the superb sound design, rich with ominous clanking, screeching and clattering. The cinematography is innovative, filling the film with an abundance of kinetic energy (including both real-time shots and stop-motion animations).

Shinya Tsukamoto proves himself as both an able writer and director. His vision is conveyed effectively, forcing the audience to question the society they live in. This is a rich and powerful film that succeeds in almost every way, pushing the envelope to new, imaginative, heights. 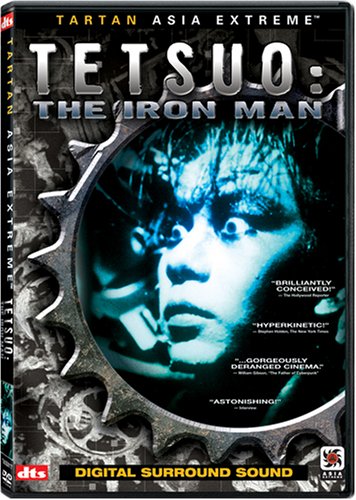