These Shallow Graves by Jennifer Donnelly

This book was given to me for free in exchange for a review.

The times when money mattered more than love, big skirts and corsets, and where if you were a lady who spoke her mind, you’ll never get married, have children or a safe future. The year of 1890 is where Jennifer Donnelly placed her newest novel These Shallow Graves. From female rights, murder mystery, and sometimes a thriller, this book has it all, as you watch Jo stumble down a dark and lonely path to find out who killed her father.

Josephine Montfort, who goes by Jo, on the outside was a perfect lady. She was an American aristocrat, beautiful, quiet, with a ramrod straight spine you wouldn’t know she was different until she opened her mouth. Jo was curious about everything and everyone in the world. She would speak about the mistreatment of the Mill Girls at tea time, and bring up prostitutes during dinner. She also had the undying need to be a reporter. She wanted to tell peoples story’s for the world to hear, an unladylike career at her age. Her role model, Nellie Bly, made her dream seem more like a reality. It wasn’t until her father was found dead, that Jo went out of her way to find answers. It was said that Charles Montfort accidentally shot himself while cleaning his pistol. Jo knows her father was experienced with guns, knew that was not the case. Going out to the real world Jo finds out that life is worse than she thought, and that the truth is the darkest thing overall.

Down that dark path Jo meets people she only dreamed of meeting. From prostitutes, to pickpockets, to the dirty cops, Jo is startled how nasty the world is, outside of her little bubble. She knew men like the Tailor and women like Madam Esther, ruled the town paying the cops to keep quiet. Girls like Fay, who looked up to these people, not because she loved them, but because they were the ones who took her in when no one else wanted her. There she also met Eddie, Eddie Gallagher. Eddie was a young reporter, ready to write a big story that will boost his career. This was exactly the guy Jo needed to help with her story. Together she and Eddie tracked down the people Jo needed, found evidence, and shared a few close calls in order to find out who killed Jo father and why.

Jennifer Donnelly did an outstanding job with this novel. The writing was strong, fast paced, and kept you reading for more. Jo was the loving girl who just wanted to solve a case, and was strong and wise beyond her years.  As the book was written in the time frame of the 1890’s the historical facts made it more real, as you imagine Jo running in her dress down a cobblestone alley. As this is a young adult novel, there is a little romance sprinkled in, as Jo has to choose the man her family wants her to marry, or the one her heart longs for. Jo is an amazing person with a strong sense of right and wrong, and an advocate for female rights in her time. As the book is just under five hundred pages, it is worth every page, making the ending sweet yet bitter as you have to guess where it goes on from there. 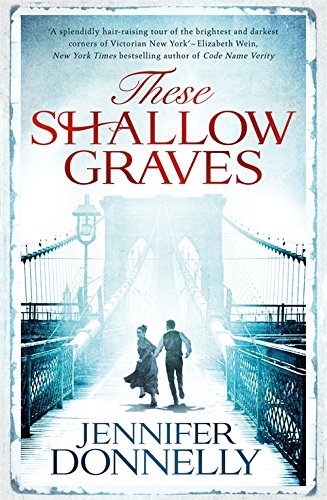