Not a Drop to Drink by Mindy McGinnis | Teen Ink

Not a Drop to Drink by Mindy McGinnis

You are probably asking yourself why. Why another dystopian novel? You probably have at least three if not five of them scattered throughout your personal libraries and there’s a good chance you don’t want another one, not even from the library, at least for a little while.

Dystopian novels have been published in abundance over the last few years and after a few different reads, all story lines appear to be more or less the same. Give or take a few stand out novels, the fascination with dystopian literature is dwindling. But don’t give up just yet. There’s one more dystopian worth reading.

Mindy McGinnis’s Not a Drop to Drink is a brilliant portrait of a world lost in a deep drought. Lynn has lived her whole life in an almost water-less world. The only human she has ever spoken with is her mother. And the first time she ever killed anyone, she was nine.

In our world, Lynn would be considered sheltered and perhaps a bit crazy. But in her world, she’s one of the lucky ones. In the middle of the woods Lynn has a home. There’s no electricity, the only food she has is the food she kills, and her and her mother sleep on cots in the cellar, but at least they have somewhere to call home. And at least that somewhere has the pond.

The pond is the only water supply Lynn has known. She has been raised to do everything she can to protect it; which usually means killing anything, and anyone, that come close. But when smoke on the horizon, trails of footprints, and nighttime threats start to emerge, Lynn’s strength and will to survive are pushed to the absolute edge. Lynn has what everyone in her world wants, and there are people out there who will stop at nothing until they get it.

Readers will have no choice but to relish in this thrilling and stimulating debut. Not a Drop to Drink will leave hearts pounding and, like many people in Lynn’s world, thirsty for more. Bibliophiles will find that they are savoring every bit of McGinnis’s poised writing. And even those who believe the genre is overdone will find that they can make room on their shelves for just one more dystopian. 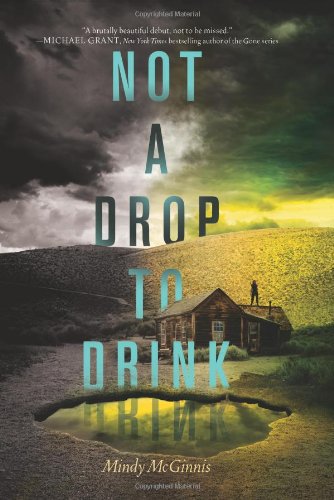