If you are looking for a story about a happy family who goes on trips and give their children everything they need, then please go look for a different book. This book series is about the Baudelaire orphans and their unfortunate events they are forced to endure, throughout their stay in our lives. From abuses, house loss, untimely deaths these children have only each other and their wits to survive as they are plunged into a world worse than death, discovering the secrets their parents tried so hard to keep them from.

They were not always known as the Baudelaire orphans, but the Baudelaire children, the sons and daughters of Mr. and Mrs. Baudelaire. Violet at fourteen was the oldest with a colossal interest in mechanical engineering. When an invention comes to mind, Violet ties her hair back with a black ribbon as something as futile as hair should not get in the way. The middle child Klaus, as well as the only boy was just over the age of twelve. Where gears and leavers were not his thing, Klaus loved to read, anything for literary fiction, to science novel, with anything he read he would have kept stored in his brain, never forgetting a single thing he read. The youngest was Sunny, an infant, who unlike her siblings were too young to even speak and could walk a short distance, but her talent was to bite. Yes, biting. From her chew toys, to wood, to people, Sunny has the most impressive mouth of any other infant her age. They were the prize in their parent’s eyes, who unlike other parents let their children in their studies, and had them sit at the table when they have guests over, allowing their young ones to add their voice into the table conversation. There was no doubt that they were a happy family, one that deserved to have a happy life together. But as stated this is a series of unfortunate events not happy ones, thus the happy life of the Baudelaire family was cut short.

Going to the beach the Baudelaire children learn from their parents’ banker that they are now the Baudelaire orphans as their parents perished in a fire that destroyed their home. After a few days of living with the banker and his unruly children the Baudelaire are sent to live with their relative Count Olaf. To them, he is either their third cousin four time remove, or their fourth cousin three times remove, who lives on the other side of the city, oh whom their parents never mention or had over for dinner. Where Olaf home is a mess, and his manners are rather unpleasant, the orphans discover the real motive behind Olaf’s plans, and with no one to help, the siblings much work together in order to stop his evil plans.

Lemony Snicket (the pen name for American novelist Daniel Handler) is a detective (the author) of the Baudelaire’s case. This book, the first in a very long series is good, meant for young readers, short and kept a fast pace. There is just one question I am kind of picky about: Why name the third child Sunny? The name Violet was most popular around 1924, and drop off in popularity from the 50’s to the 2000’s. So when this book takes place, Violet was a rare-ish name. Klaus again is an unusual name, so why did Snicket name their third child Sunny? It makes no since. Something else somewhat annoying was Snicket’s constant need to tell us what some “big words” definition is, even though most are obvious. “The kitchen grew cozy as the sauce simmered, a culinary term which means 'cooked over a low heat”. Where most people know simmered means cooking over low heat, some do not, so thus we cannot be too harsh on Snicket’s choice to define certain words. With no much character development (it is the first book) I am much looking forward to see the children grow stronger and show more love for each other, especially on what is to come in the next unfortunate event. 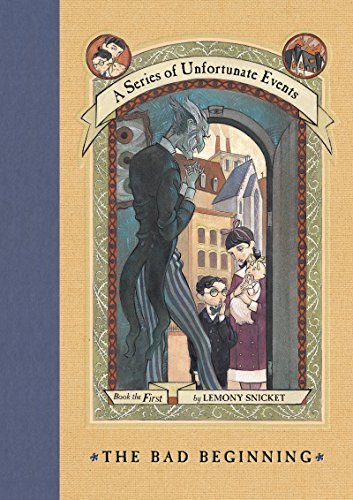 Unfortuant is the only word to descbribe these siblings situation.