Afghanistan, a country we see as men walking around in robes holding guns, women covered in head to toe, children with ribs poking out lying on the streets. Afghanistan was not always like this. It started with the fall of their monarchy, then Russia invaded, followed by the Taliban, who rose to power to kick out the Russians. After September 11, 2001, the United States invaded Afghanistan, stating the Afghanistan War which lasted from 2001 to 2014. This story, much like Khaled Hosseini previous book, The Kite Runner, shows the beauty of Afghanistan, the horrors of what the Taliban had done to their own people, and how they kept faith throughout it all.

Mariam is a harami, in English that means a bastard, or the nicer term a child born out of wedlock. It was never told why Jalil, her father, never married her mother, Nana, even though he already had three wives, what harm could a forth do? Nerveless they were never married, Jalil lived in a big house in Herat with his wives, where Nana and Mariam lived in a mud caked house outside of a village. Jalil though, came every Thursday for an hour or two, visiting with Mariam, playing games, and being a good father to his harami daughter. For that Mariam loved him, and fought with her mother as she defended Jalil’s honor. Mariam for her fifteenth birthday wished to go to the movies to see Pinocchio with Jaili and his wives. Mariam waited for Jalil to pick her up, when he never came, Mariam walked to his house and spent a night on the street, waiting for her father to let her in. Jaili never did, thus a turning point in Mariam’s life as she realized that, even though her father visited her every week, he was ashamed of her. Heartbroken Mariam went back to her mud house only to discover that life was also taken from her. Giving her no choice, it is up to Jalil to choose her destiny. I hope for the sake of Jalil that his wives talked him into it, that he made the decision to marry Mariam off to Rasheed, a man who wife and son had already passed away. Mariam learns the hard way, of what her mother tries to teach her as a girl, “It’s our lot in life, Mariam. Women like us. We endure. It’s all we have. Do you understand? Besides, they’ll laugh at you in school. They will. They’ll call you harami. They’ll say the most terrible things about you. I won’t have it”.  With that, Mariam became a subdued housewife, bending to the will of man, until someone shed a little light, and gave Mariam the hope to fight.

Laila was not like other girls. Her father, a university professor, always valued education, either it was for his sons (Ahmid and Noor), or his daughter. When she is not learning everything she can, Laila spends her time with her best friend Tariq. Tariq has been her best friend since Laila can remember, even though he has a prosthetic leg, that does not slow him down when he’s beating the bully who was mean to Laila. Their relationship was cute, this seven year girl and nine year old boy, playing games of make-believe. Yet as the years go on, her mother gets worried about her daughter's reputation because of Tariq. Laila’s brothers enlist in the “army” to take down the Russians who were invading, and were killed in action. Their mother, to honor her sons, told her husband and Laila no matter how bad it gets, she will see the greatest of Afghanistan for her sons. Laila and her father stayed with her mother, as friend after friend got shot by the Taliban, or killed by a stray missile. Nothing was going to make Laila’s family leave, after all, Ahmid and Noor, were the light of her mother’s eyes, nothing was going to make her leave, nothing but death.

Khaled Hosseini is a stunning writer. This story is different than his first, still in Kabul, Afghanistan, and the same time period, but in the view of two women, with almost a twenty year age gap between them. It goes with history, as the book time frame is from 1959 to 2003, giving you the invasion of Russia, the Taliban and the start of the Afghanistan War. Unlike his previous book, this is taking on by the point of view of women, making what the Taliban did to their women, much more dramatic than in The Kite Runner. Hosseini crafted each character perfectly, Jaili the absent father who spent his life regretting letting Mariam go. Mariam, was broken at a very young age, was able to mend and start enjoying life under the care of Laila. Even Rasheed, the husband, who was cruel, portrayed what the media view as “The Middle Eastern Culture” based off of media. Laila, a girl who gave her heart away at a young age, and tried with all her might to give it back. The deepest part of the book was when Tarqi, her childhood friend, finally admits that she was his soul mate. “Laila hoped she wasn’t blushing. ‘You changed the subject.’ ‘From what?’ ‘The empty-headed girls who think you’re sexy.’ ‘You know.’ ’know what?’ ‘That I only have eyes for you” That line hit you like a train in the heart. Tarqi, even though is in the story for such few times, was the best character in it. He was strong, brave, handsome, and never let anything stand in his way. No reason all those girls fell at his feet, but he had eyes for Laila, a smart girl whose tongue was a whip, able to talk to him for hours at a time. Even though not all the characters got happy endings, in the end Allah (that’s the Muslim god) gave peace to them all in the end. 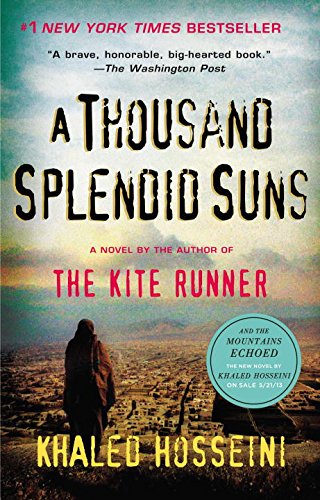 A stunning novel taking place in one of the most war torn countries in the world.