Along for the Ride by Sarah Dessen | Teen Ink

Along for the Ride by Sarah Dessen

Marriage is supposed to be forever, right? From those months of getting to know you, dating, to engage, then finally the day when you announce yourself to the world as husband and wife. You are supposed to let go of your father’s arm to grab the arm of the person you love the most, have the preacher lean in to tell your man he may kiss you. Then you are supposed to run, holding on to him, though your family and friends into a waiting car that will take you to a location where the only other person you are supposed to know is him. There will be harsh times, fights, financial problems, things you cannot control. Yet when he comes home from work, your son goes off to the first day of school, your daughter takes her first steps into his outstretched arms with you documenting the whole thing. Those are the times you look forward too, and reflect one. Known as the good old days, those are the ones you think of when things are tough.

Auden was the outcome of a failed marriage. See in her household it was the outcome of success that broke her family apart. Her father, an award winning author who struggles writing his second book, where her mother was an award winning literature professor with several articles published and three books. Her father got big while her mother sat back taking care of her colicky brother, Hollis, alone. Once Hollis was old enough, her mother stuck back at the university with a vengeance, winning award after award, while her father sit back and watched his successful wife take the spotlight. Auden was not like Hollis, but the opposite. Where Hollis was loud and childish, Auden was the mini adult, who sat quietly at the dinner table, and studied almost all the time. Thus it has made since when Hollis graduated, he went off the Europe, backpacking around, calling back only to ask for more money. With Hollis out of the house, and Auden is an adult is when the fighting happens. From snide comments at the table it was when Auden went to sleep when her parents went at each other, yelling about everything, claiming the other success is what keeping them behind. Auden, being a teenager (a kid really), thought of the one thing to keep her parents from fighting: her. So instead of going to bed, Auden stayed up. Making frequent trips to the bathroom and kitchen, letting her parents know that she was still there. That stopped, then a while, but even the presents of Auden could not keep them from fighting. Thus like any other failed marriage, it ended with a divorce, her mother sitting at the table across from Auden, with her father leaning against the wall. Her father packed his bags and moved to the beach town of Colby, where he met Heidi, got engaged, married and then got Heidi pregnant. Her mother kept at the university, having grad students who adored her come over for drinks every Friday night. Where is Auden? Staying up all night to keep her parents from fighting, led her to never sleep again. Auden spends every day and night studying, getting herself into one of the top schools: Defriese University. Her mother was proud, if her father knew he might be proud, all was set in Auden life, until the summer hit and changed everything.

Auden and her mother relationship were different. Her cold, calculating mother was not the one to show feeling, always pushing Auden to the next academic level. After Hollis sent home a picture of him in Greece with a tacky frame labeled ‘The Best of Times’, made Auden realize she cannot spend all summer studying for university in the fall. With a little kick in her gut Auden makes a decision against her nature. Packing her bags she headed to Colby to spend the summer with her father, her step-mom and her new baby sister. Arriving, Auden knew this summer was going to be different, from the hollers when she first arrived from the boys who recognized her as someone they did not know, to her first make out section with a dude guy she just met. The house was a mess with her father putting all the responsibility of colicky Thisbe (the new born) on Heidi, as he needs his nine hours of sleep each day. With trouble at her new home, the girls she works with slowly warming up to her, Auden full change is when she meets fellow insomniac Eli. Eli, who also grew up in Colby, shows Auden around in their night life adventures to complete Auden quest. A quest that Eli made for her, allowing Auden to finally witness the childhood she has been denied. “It was the last moment you’d think would mean anything, and yet somehow it did. Like only in all this chaos could it finally feel right to say the one thing I’d wanted to all along”. From two in the morning bowling, to the paper run, Eli shows Auden the world she has been missing, where Auden helps Eli forget his past during their 3a.m. shopping, to their midnight pies, during the day they were strangers, but at night they were something more.

Sarah Dessen, the queen of teenage girl novels. Somehow she gets it so right to how a girl feels in these situations, it makes you afraid of all the hearts Dessen must have broken herself. Auden, a brilliant girl, with no social life chooses the summer before college to reinvent herself. Auden was likeable, kind of standoffish, after all she was good at everything, everything that she tried actually. Her fear was a common one: failure, with the fear in mind that kept Auden for even trying it to begin with. Eli, was kind of cold towards the beginning, not allowing the one person he has not known his entire life into his life, still he did and because of that we have this amazing story. From Dessen heart caching love, her decent writing, keeping the story fast pace and exciting. Eli is another boy you have to add to your Dessen boy love list, where Auden is a girl who learns to love, have fun, and create a beautiful summer for herself. 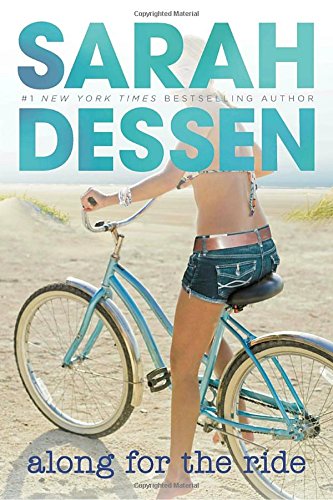