Katniss Everdeen, The Girl on Fire. Katniss, whose home was District 12, was in The Hunger Games. Her feature was being star cross lovers with Peeta Mellark, the other District 12 tribute. Together they won the 74th Hunger Games, brining District 12 up to a total of three victors. The next year was the Quarter Quell, the third one the world had ever seen. The First Quarter Quell, 25 years after the Dark Days, was when citizens voted on the tributes, pinning neighbour against neighbour, as you vote for the other’s children, hoping yours does not get too many votes. The second Quarter Quell they sent in double the amount of tributes, two girls and two boys from each district into the area. The third Quarter Quell, the first Katniss would have been a mentor for, was made up of existing victors, making Katniss and Peeta go back into the area for a second time. They played their game different this time, sticking to the lover’s act, they made allies and formed a plan, making themselves the careers this time. With their final attack in the place, it seems life was moving on the outside area as well, as when Katniss struck the force field, so did the rebels attack. Causing another Dark Days, with Katniss as the symbol.

She cannot understand why they rescued her and not Peeta. Peeta was the one people loved, who said the right things at the right time, which made you like him. Not her, never her, it was always him. Trapped in District Thirteen, with Peeta in the Capitol, there is nothing for her to do but pace and wait. Sometimes Peeta made appearances on Caesar talk shows; the first was him describing the games. “He works just as well in words. “Once you’re in the arena, the rest of the world becomes very distant,” he continues. “All the people and things loved or cared about almost cease to exist. The pink sky and the monsters in the jungle and the tributes who want your blood becomes your final reality, the only one that ever mattered. As bad as it makes you fell, you’re going to have to do some killing, because in the arena, you only get one wish. And it’s very costly.” “It cost your life,” says Caesar. “On, no. It costs a lot more than your life. To murder innocent people?” says Peeta. “It cost everything you are.”” Honestly, why did they pick Katniss over that? Katniss is on the edge of breakdown, unable to find a light. Caught between her own hatred of life, her longing for Peeta, love for Gale, and now she Katniss, was supposed to be the Mockinjay, the symbol of the rebellion. If only she could stay awake more than two minutes.

Katniss does not know what her heart wants. In a way she loves Gale, her lifelong friend, hunting partner, the one who always knew what she wanted. In a different life they would have gotten married, and maybe run off and live in the woods like Gale away wanted. “There’s no District 12 to escape from now, no Peacekeepers to trick, no hungry mouths to feed. The Capitol took away all of that, and I’m on the verge of losing Gale as well. The glue of mutual need that bonded us so tightly together for all those years is melting away. Dark patches, not light, show in the space between us. How can it be that today, in the face of 12’s horrible demise, we are too angry to even speak to each other?” Gale wants to be a solider, and in a way Katniss does too. Yet Katniss seen too many dead bodies in her lifetime, and values human life, especially the innocent, more than Gale. Where Katniss loves him, she only truly notices him when he is in pain. Then there is Peeta, the boy with the bread. Even before the games started he was the one who helped Katniss decide to live, before she even met Gale. Peeta who announced to the world he was madly in love with her, causing her to get more support than she could ever get on her own in their first Hunger Games. Peeta was the one with her, though the arena, and afterwards, when the nightmares woke her up at night. Peeta, unlike Gale, was not angry, did not share the same fire to fight, letting his calming waves roll over Katniss in her times of need, where Gale would just add more fuel to the fire. Unlike Katniss (as only a best friend does) Gale knew who she would pick as he believes: Katniss will pick whoever she thinks she can’t survive without.

Suzanne Collins ended this series not with a bang but with an explosion answering all questions and leaving tears down your face as Katniss finally gets what she deserves. Once again divided into three parts: The Ashes, The Assault, and the Assassin, each part more catching that the last. The plot has three main locations: District 13, District 12, and the Capitol: 13 is where the rebels are at, and where Katniss lives most of the time, 12 is her true home no matter what, and the Capitol where everything goes down. This story goes a lot deeper into politics as we got to learn about Snow’s rise to power, how the rebels feels the government should be run, and elections of the presidency. Romance is also heightened as Katniss has to make her decision: Gale or Peeta, one that even if you are not happy with, will leave you crying as Katniss explains perfect why she picked one over the other. Finally, a sweet epilogue that will break your heart as you finally know their world is ended, at least for now. The worst part of the story is kind of understandable, as Katniss is broken. She lost her home, one of her lovers, the other has a death wish, and Snow is playing the ultimate mind game with her. As a seventeen-year-old girl, it is no wonder she falls part. That is how Collins’s makes her more human, and Katniss was not able to tolerate it and be the tough hero that we see in all forms of media, but a girl who is in over her head, and yes, is strong, but is not able to handle it all perfectly. From the fire, to the ashes, the capitol better watch out, because the girl on fire is coming for you, and will not stop till the whole thing burns to the ground. 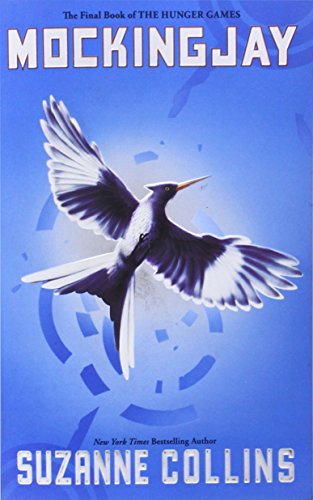 “My name is Katniss Everdeen. Why am I not dead? I should be dead.”