The Voyage of the Dawn Treader (The Chronicles of Narnia #5) by C.S. Lewis | Teen Ink

The Voyage of the Dawn Treader (The Chronicles of Narnia #5) by C.S. Lewis

Narnia, a place where animals talk, kings’ rule, and even the trees can move. Narnia had seen some dark times, from the White Witch, to the king who almost killed all the talking animals. The Pevensies siblings: Peter, Lucy, Edmund and Susan, were the last humans in Narnia, the first time as they ruled as Kings and Queens known as the Golden Age, the second as children again helping Price Caspian get the throne and save the talking beasts. From the time they left, Narnia has been taking care off and is thriving, so much it is the dawn of exploration as Price Caspian, along with a brave crew set sail to discover Aslan Country, known as the End of the World.

Lucy and Edmund are quite bitter to be spending their summer at their aunt and uncle's house. Peter is off doing an internship with the professor who took them in during the war, Susan and their parents are going to America, leaving Lucy and Edmund stuck with Eustace. Eustace Clarence was an odd child. He did not call his parents by Mother and Father, but by their first names. He was picky, a brat, vegetarian, and for the nicknames he has none, for they are given out by friends which he has none of. If someone besides Lucy and Edmund were upset to have them stay it was Eustace. What hurt more was he herd their whispered conversations about Narnia, and picked on them for their make believe world. It gave Eustace a pleasant surprise when Narnia turned out to be real, as the country draws Edmund, Lucy and Eustace back in.

The Dawn Treader, a magnificent boat. Lucy and Edmund are greeted by King Caspian, and are delighted to know it has only been three years since they last visited. Caspian tells the group him and his men are off to find his father's friends. Seven of them sailed off the find Aslan Country, and none of them ever came back. Leaving Narnia in good hands, Caspian was determined to find his father’s friends, and was glad that Edmund and Lucy could join him on his adventure. The crew goes on an adventure, discovering lands they had no idea about, finding lost friends, and discover more about a world they all love so much.

C. S. Lewis did another adventure featuring Lucy and Edmund. With Peter and Susan no longer allow into Narnia, the Pevensies story is coming to an end. The story is duller and the story line is predictable: sail, find an island, discover a lord, the island is scary, leave, sail, and so on and so on until you find all seven lords. Aslan appears more in this story, yet he does not really do much as a character. The ending is cute as Caspian meets a very special someone, and the siblings and cousin finally start getting along. Still, a quick read so when it was dull it was not for very long. The story of the Pevensies is ending, but for Eustace it is just beginning. 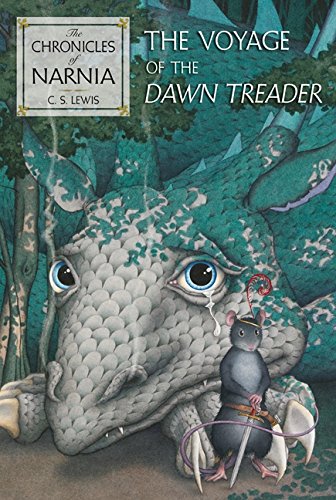