The winners of the 74th Hunger Games: Katniss Everdeen and Peeta Mellark! District 12 was proud that both their tributes were able to come home after the games, giving the District a total of three victors. Katniss and Peeta returned to semi normal lives. They both had a house in the Victor’s Village with only Haymitch for a neighbor. Peeta devolved a cold shoulder to Katniss, after Katniss basically told Peeta on the train that was acting about her feelings for him during the games. Where for now the cameras were off them, but only for a while. Katniss and Peeta will always been under the cameras of the Capitol, it’s only a question on how long till they snap.

Katniss soon realizes she has nothing to do. She spent years hunting, selling what she caught, and brining the rest home to her family. Now her family is set for life, living in a nice home, and having more food than they could ever eat, Katniss is bored. She still go hunting, but for Gale, and not for herself. Gale is working in the mines, working six days a week, and even though he does not like it, his family is relying on Katniss kills to keep them fed. It is Sunday that she and Gale can spend together, hunting, and trying to fill the gap that the games left between them.  Gale, knowing his time is short, makes a move on Katniss by kissing her on their first Sunday together, as he tells her: “I had to do that. At least once.” Katniss knew there was no life with Gale, as she does not want to marry, and vow never to have kids. President Snow makes a house call to Katniss, to get her unnerving information. To stop an uprising on the Victory Tour, Katniss needs to make the audience feel like the berries trick was not a rebellion act, but a love struck girl, desperately trying to save her life.

The love triangle. Ah the classic triangle following Katniss as she has to pick between Peeta and Gale. Gale her lifelong friend, the first person Katniss let in after her father passed away. Both from the Seam, they could be taking for siblings, or as the Capitol known them as cousins. Gale made her laugh, make her feel hopeful, help kept her family alive when Katniss was still learning how to hunt. “For the first time, I reverse our positions in my head. I imagine watching Gale volunteering to save Rory in the reaping, having him torn from my life, becoming some strange girl’s lover to stay alive, and then coming home with her. Living next to her. Promising to marry her. The hatred I feel for him, for the phantom girl, for everything, is so real and immediate that it chokes me. Gale is mine. I am his. Anything else is unthinkable.” Does that no sound like a girl in love? Yet Peeta, when the cameras are on, she is throwing herself at him to prove that she loves him. To Peeta, Katniss is his whole life, and that if the situation is given, Peeta will give up his life to save her. Katniss, like with Peeta in the cave, feels something deep inside her that is drawn to Peeta. Where Gale is her best friend, Peeta is her ally, both equally important.

This book proves that sometimes authors should stop after the first. Suzanne Collins did a fantastic job with The Hunger Games, but this being the second book in the trilogy, let the whole series down. First the love triangle (as previously described) adds another, except that was unnecessary. The whole concept of the Quarter Quill was added because otherwise nothing would have happened in the book. The Quarter Quill (for those who do not know) is every twenty fifth hunger games as they always add a twist. The first they made the citizens vote for their tributes they wanted to represent their district. The second was they sent in double amount of tributes, sending forty-eight kids to their death, instead of the normal twenty-four. That was also the year District 12 got their first winner, Haymitch. The story was also divided into three sections: The Spark, The Quell, and The Enemy. Katniss learns who the real enemy is, who she truly is, what her feelings are for Gale and Peeta, but most importantly: She is the mockingjay. 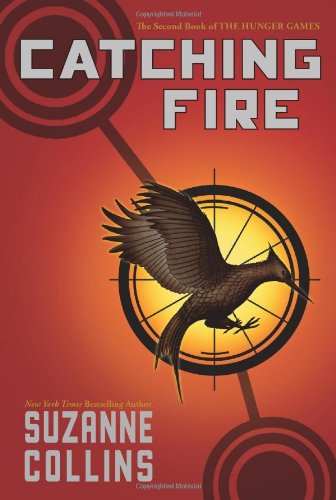 The fire is spreading, but can they keep it in control?