The Magician's Nephew by C.S. Lewis

I am doing this series in chronological order not published order. As this might read as the sixth book it is actually the first.

Narnia, a world unlike no other. Filled with mysteries, talking beasts, greatness and evil. A world that was only born moments ago, full of potential. Potential to be good, but potential for evil to emerge. The talking beasts all bow down to their leader: Aslan, the great lion. Aslan is the ruler of Narnia, until he crowns two sons of Adam and two daughters of Eve, who will appear later on in the history of Narnia.

Polly was just playing in the backyard, by herself, like normal child, when Digory jumped over the wall, taking Polly with him, on an adventurous journey. Digory wanted to know what his Uncle Andrew was doing in his attic, and chose Polly to help him out. Uncle Andrew was creating a magical ring that would take the wears to other worlds. The only problem was there were two rings, one that will take you to the outer worlds, the other ring was to take you home. His test subjects, guinea pigs, were unable to change rings, he himself was too valuable to lose, so that left Polly and Digory. Forcing Polly to take a ring, Digory had no choice but to take the other ring and follow his friend into the strange world. There Digory and Polly explore the world around them, going into other worlds, being chased by evil, in the search of finding what Uncle Andrew wanted, and finding a way home.

C.S Lewis chose this book to be his first simply because it was the birth of Narnia. You are introduced to two children, Polly and Digory, who will never make an appearance again until the very last book. Their plot is simple: Watch the birth of Narnia, but more importantly bring the white witch into Narnia. The book speed was slow as it spends most of the time as Polly and Digory exploring the worlds with not a lot happing. To get the gist of the series I would suggest reading it, but in no way does it interferes with the Pevensie story, as it is an unnecessary prequel. 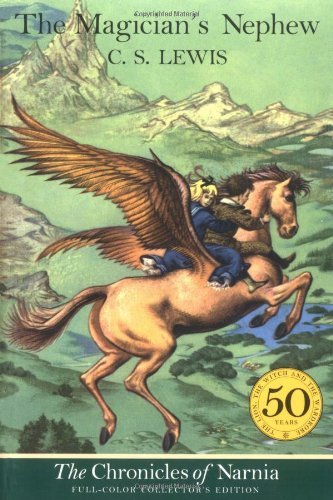 A prequel to the Narnia series you know.