A man pushes a rock up a hill. Day in and day out he spends all the sunlight hours pushing the boulder up the hill. When the sun sets the boulder sits at the top of the hill. Only when moonlight touches it, does it roll back down to the bottom. A child grew curiosity of the man, and went to see the man and ask of what he was doing. When she approached, she notice the rock had dates, names, and places carved into its hard surface. “Sorrows of the world” the man told her, as he was the pilot, taking them to the top of the hill each day. He is making a river, a river that will wash away old sorrows bringing a new beginning to all that have been washed up in it.

Cassia is sorting for the Society, just as she has been born to do. Yet she is doing it as part as the Rising. Once making it to the Rising, they divided them up, sending Cassia to Central to work as a sorter, and Ky and Indie to a Outerprovince to work as pilots. After all the Society did not even have time to reclassify her, so it was easy getting Cassia back into the Society. The best part, but also worst part, was Xander was with her as he was an Offical, and is still her match. The Rising had a carefully laid out plan of how to take down the Society. They were going to infect it with a plague, one which, when the Society was on its knees, swoop in with the cure they had saved up. Some though would be immune to the cure as they are the older versions of the babies they made immune to the red tablet, they gave them when they were born. The Rising feel like they are right and that the Society is wrong, but some feel the Rising is just the Society behind a mask.

Cassia loves Ky, and Xander, but Ky more, yet Xander is special to her. These thoughts rotate through her head. Yes she was matched to Xander, from a society she no longer believed in, but in the same way they connected her to Ky as well. Ky, Xander and Cassia, whom some refer them to the Pilot, Physic and Poet. Somehow they have been linked together, by a bond that is stronger than life itself. “I know you love me. I love you, and I always will, but things can’t hold like this. They have to break. You say you don’t mind, and you should. Because we’ve done too much waiting in our life, Xander, Don’t wait for me anymore.” Was the words Cassia used to tell Xander how she wants him to move on, and find his soul mate.

Ally Condie finished this series scraping by. First the characters never developed. The love triangle between Xander, Ky and Cassia always seeming slightly off. You love your best friend, in the same way you love your mother and father, siblings, and people you genially care about. So why couldn’t Cassia love Xander the same was she loved Bram, even if he loves her in a different way? Answer the stereotypical mindset that boys and girls cannot be friends, and only friends. Also things between Ky and Indie heat up, as Ky who loves Cassia, also loves Indie, but cannot stop thinking of Cassia when he looks at Indie. The plague rages through the Society, making them give up power for the Rising in exchange for the cure. Yet it is spreading faster with a mutation on it, causing the cure not to work. The Pilot is scare as people are dying by the hundreds by the mutated cure, and no new cure in site. The Pilot takes Ky, Cassia and Xander thinking one of them knows how to stop the cure. With the clock ticking down the trio race to save their friends, family, and society, as Cassia by the help of her grandfather remembers something the society wanted her to forget, as the first time she worked for the rising was the Red Garden Day. 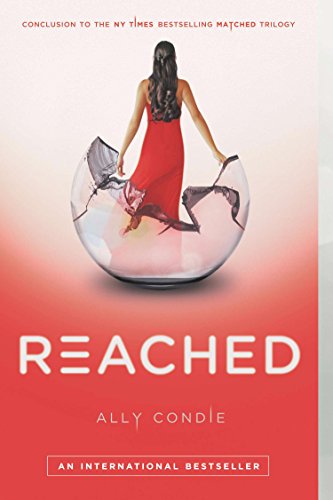 Finally the series is done!