Catfishing is when someone pretends to be someone they are not, online. This can be the forty-seven year old male talking to a thirteen year old girl, or three girls wanting to get back to someone. This is a highly illegal and extreme cases can be tried as identity fraud. No matter your excuse there is no good reason to catfish someone, no matter how much they have hurt you in the past.

Annalisa Bradley is a normal high school girl, from her love of the new rock band, studying for math tests, to her bright red curly hair. Everything is average except for her huge chest. Because of that she instantly becomes the center of attention from the eyes of boys, to the jealousy of girls. Yet the only thing Annalisa wants is to go to her favorite band, Brass Knuckles, concert. She and her best friend Maeve, were going together (even though Maeve wasn’t that big of a fan), and Annalisa knew she was going to be the one the lead singer pick to come up and sing a duet with. It was up to her mother to get the tickets, as Annalisa was stuck in math with Copper, who decided he would be her first boyfriend, waiting for the text from her mom. The text never came though as her mother got in a car crash (she’s okay though) and was unable to get the tickets. Annalisa then goes into crisis mode as she tries everything to get a set of tickets.

Noelle Spiers has it all. The perfect family, to being number three in a trio of friendship. It has been Noelle and Eva forever, then Tori joined them making them unstoppable. The only thing that would make her life better if her lifelong friend Copper would finally see her as someone to love. Yet he is too busy with Annalisa to notice her. Eva knows a way to fix that, after all Eva hates Annalisa after the freshman formal in which Annalisa allegedly hooked up with Eva’s longtime boyfriend Amos. Eva created Declan, an online boy who happens to share all of Annalisa likes and dislikes. Eva set him up on the Brass Knuckles fan page, and responded to Annalisa’s plead of not having tickets. Yet because she and Tori are busy with play rehearsals, it is up to Noelle to keep up the Declan online image. After weeks of late nights, discussing everything from petty high school drama, their favorite band, to the mysteries of life. Noelle realizes that Annalisa is not that bad of the person, where Eva was driving her nuts. Noelle realizes she needs to stop people from walking all over her, starting with Eva, Tori, Cooper and finally Annalisa.

Melissa Schoor wrote this amazing story, filled with revenge, drama, boy, love, and catfishing. It is divided into two points-of-views: Annalisa and Noelle. From Annalisa you get a great deal of family background, from her parent’s divorce, her and her old sister strain relationship, to how Maeve is her only real friend. Noelle has a different life than Annalisa, but struggles with her self-confidants, and her friends. You get to see how Noelle gets crushed by the power of Eva, and struggles to try to stand on her own two feet. Where the writing is fair in most places the storyline is unique as two people become friends, but only one knows, as the other is being catfishes. 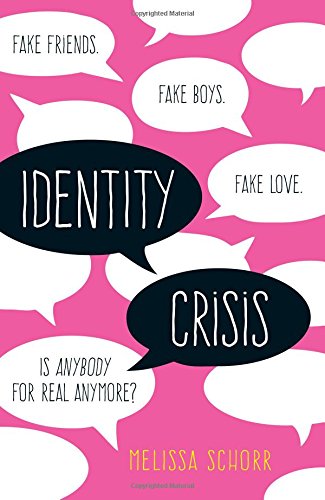 When Noelle rather be Decland than herself.