Love is the most powerful things that the angles willingly gave the human race. People do all sorts of crazy things when they are in love. From flying across the planet, to showing random acts of affection towards their lover. Some even kill to protect the one they sleep next too. All in all love makes people do crazy things, but it is the most powerful emotions humans, and even most non-humans can express. Once in a lifetime you find this love that lights a fire in you that can never be put out, and you and your other half try everything to keep that fire going, no matter what’s a stake.

Nora has to choose a side, Patch or her people. After her “father” Hank Miller died he made Nora head of his Nephilim army, right around the time they were going to war with the fallen angels. The other leaders do not trust Nora, especially Lisa Martin, but her first lieutenant Dante Matterazzi , promises he will do whatever it takes to keep her in power, as he swore an oath to Hank saying that if Nora gets kicked out of power his life goes with it. The first thing Dante wants to do is stage a break up of Nora and Patch, and tell everyone that they are the new “It couple”. Needless to say Patch wasn’t on board with this plan. “Patch meant more to me than I could more put into words. His love and faith in me took the strings out of the hard decisions I’d been forced to make lately. Whenever doubt and regret crept into my conscience, all I had to do was think of Patch” were some of Nora’s thoughts on Patch. Yet to keep herself and mother alive she has to lead the army, and if that means stage breaking up with Patch, so be it, even though neither of them are happy about it.

Pepper Friberg, an overweight male with some issues going on. He is an archangel, leading a double life one on earth satisfying his gambling addiction, the other on heaven. Yet being blackmailed by someone on earth he is out for Patch’s assistance on dealing with this person. Nora has to deal with her own devil as Marcie decided to move in with Nora and her mother. Reasons? Because Marcie’s mother think it would be best to get Marcie out of the house, and live with what was going to be Hank’s new wife. When Nora’s mom was thrilled about this, Nora was less than sure. With Marcie, who had quite cheerleading, spends her time trying to figure out who killed her father, not realizing the killer was just down the hall. To make matters worse not only did she live with one of Patch’s ex-girlfriends, but the other ex-girlfriend seems to be spending a lot of time alone with him. That’s right Dabria is back and been doing a ton of dirty work for Patch. His reason is Dabria is expendable, much to Nora’s disbelief. The final battle is looming, in which Nora still had to pick a side. Her people are counting on her but how can she save them without letting go of Patch?

Becca Fitzpatrick did a fantastic job with this series. From book one to now you got to see Nora, this ordinary human, fall in love with the most dark and badass fallen angel Patch, and the trials and tribulations of their love. They battle bad guys from old ex-girlfriends, the Dark Hand, to Patch’s vessel. They went through break ups, making up, fights, and even sweeter kisses. This book lets you see Patch and Nora fight to the final day, and a sweet epilogue that will make you close the book with the sweetest of thoughts. Sure Nora might be dumb, and not the nicest best friend to Vee. Patch might be the ultimate bad boy with no other character traits. Yet put these two together you get a wonderful love story about a boy who couldn’t feel touch, fall in love with a girl, and how her heart changed his from black to gold. 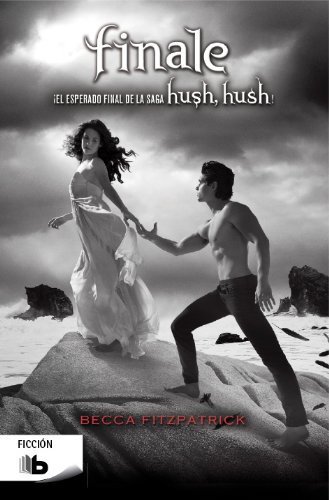 A thrilling end to the amazing series!