Me and Earl and the Dying Girl by Jesse Andrews

Greg Gaines knows he is socially awkward, and instead of finding a highschool group to hang out with like the normal people at his school, he joins all of them and none of them, maintaining casual relationships with the members of each clique. His favorite passtime, as one might guess from the statement above, is not a "normal" passtime; he creates film with his only real friend, Earl, an agressive, slightly insane youth around his age that only became his best friend through a video game session and a movie. Greg is completely content with how things are going, as he manages to avoid the drama of highschool. To him, it starts as a normal, successful senior year.

Until an old girlfriend of his is diagnosed with lukemia.

This wouldn't have affected Greg much, since his only friend is Earl, except his mother decides that Greg has to hang out with Rachel.

If you are expecting a sweet, inspiring, romantic story in which Greg and Rachel fall in love, and that love urges Rachel to fight and win the fight, TURN BACK NOW. Avoid this book at all costs. Greg doesn't fall in love with Rachel again, she doesn't feel romantically towards him, and she doesn't make it.

However, that doesn't make this book any less incredible.

Greg experiences a slight character change, despite stating in the beginning that he didn't. He doesn't necessarily believe in his filmaking skills, but he gives them a shot after Rachel's death. He realizes how selfish he was as Rachel suffered, his inspirational video for her centered aroung him and Earl.

Add an interesting, quirky, original story to developed characters and a unique writing style featuring lists, script-type scenes, and third person dialogues, and you get Me and Earl and the Dying Girl.

In short, it isn't particularly touching or inspirational, but it is a deep read, definitely worth at least looking into. 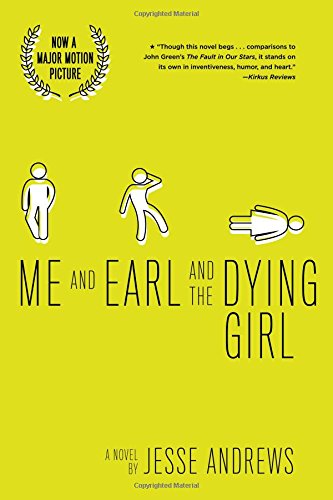