The internet is one of the basic needs for today’s society. Sure food, shelter and clothing are important, but for the civilize people of today, the internet is more essential than clean air. The issue is no one truly understands how the internet work, who invented it, and what can make it go away?

Adam is a prodigy at computers. He was a true genius when it came to programming and coding. He invented machines that were advancing in their abilities. Having finished the eighth grade, he and his team had the summer hanging out and test Adam’s inventions. His team, known as the trackers consists of him, Finn, Emily and Lewis. Going on their third year of friendship, the group has done many test missions, and truly enjoy being trackers. When a duo team starts taking interest in Adam’s team, he is determined to fight back. With his inventions on the line, Adam is willing to risk his team to get them back.

Patrick Carman made a middle school boy dream in this book. Computers, spies, hiding things from parents, was the basics of the book. The story line was easy to follow and kept a fast pace. The story was taking place in the past as Adam is telling the story to a government agent, as they are investigating what has happened. The book is different than most as it has an online interaction. You can see the videos (by typing in a code) of what has happened during the big moments. If unable to reach a computer with internet, you can find a script of what happen in the video at the back of the book. This is cool and slightly annoying as you have to get up and log onto the website before you could read again. Otherwise it was a perfect book, one that young boys will enjoy. 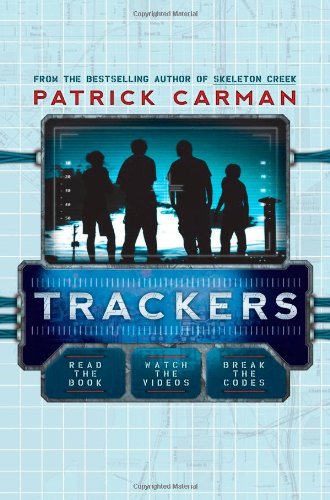 A love for eveything technology.