The city of New York is magical. With its flashing lights, parties every night, it truly is the city that never sleeps. Yet there are two sides to New York, two very different sides when comparing it to class. There is Brooklyn, and there is the Upper East Side. The Upper East Side is where the beautiful models, talented actors live, and their children. Where just your last name can get you into events and parties. This is where the rich and fabulous life, and their children who are even more fabulous.  Even though they live a great life, there are certain things that make being fabulous not worth it.

Gossip Girl is a gossiping site focused in on the young of the Upper East Side.  She (if it is a girl) pretend to be like them, attending the same school, but remains anonymous throughout the book. Instead she stalks the main Upper East Side characters, expelling what they are doing, and guessing for the reason. She doesn’t use their names (only the first letter), so you really don’t know who she’s talking about. She answers questions and reply back to her “fans” who is also using usernames to hide their identity. Her column pops up throughout the book giving us the juicy details of what the Upper East Siders are up too.

Serena van der Woodsen left her old New York life in her juror high year, and later return back to it after missing the first three weeks of her boarding school, thus being expelled. Or that is how she tells it. Other believe she had a baby, did major drugs, got an STD, or slept with every boy at her new school. Serena, who left off at a high note, felt strange going back and becoming a loser. Even worst is when her best friend Bair doesn’t act like a best friend anymore. Well after what Serena did to her boyfriend, who would want to befriend her?

Cecily von Ziegesar was not afraid to write as a teenager talk. The book uses explicit language, and details about the girls that not too many people would want to hear. The book introduces all the main character, which was quite a lot for one book to take. As a lover of the television show, this book is different as Serena’s brother is older, Chuck and Blair both have a younger sibling, who is mentioned a total of once. The writing was bad and tacky at some parts, and with the many characters it was hard to keep track. As the first book in the series, it left off a bad taste for what is coming next. 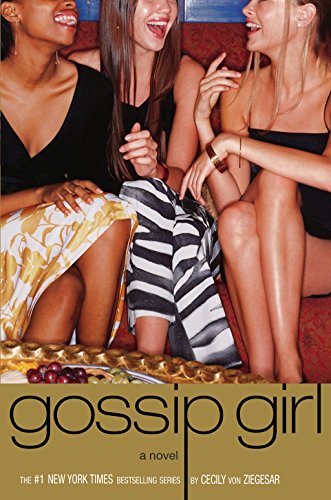 Way different than the show.