A Tale of Two Cities by Charles Dickens | Teen Ink

A Tale of Two Cities by Charles Dickens

A Tale of Two Cities was the first novel I read by Charles Dickens, though I have seen adaptations of A Christmas Carol in countless plays and films. I’ve heard many say that it was a good introduction to Dickens as well as one of his best works. The novel—originally published serially—follows the interconnected lives of many characters who get caught up in the drama of the French Revolution, primarily a young woman, her father who was previously held prisoner in France, the man she marries whose uncle was a French aristocrat, and the man who experiences unrequited love for her.


At first, the novel introduces many characters who seem not to be connected aside from the time period. This way of building a story unfortunately causes me to tune out more than I should when I’m reading about someone I perceive to not be the main character. However, as the story unfolded, I was very impressed by how the characters were connected and what that meant for the stakes of the story. That said, the characters do not go through much of a transformation and remain more or less two-dimensional. There is some emotion and vibrant relationships, but the real focus is not on the characters but what they are subjected to.


Among other classic author, we tend to think of Dickens today as a writer of highbrow fiction, but in actuality he was the most popular writers of his time period because the masses read and enjoyed his work. And it isn’t very difficult to see why, especially when you imagine reading the novel serially. It’s pretty much the Victorian equivalent to a gripping TV show, complete with violence and tragic romance. (Who’s going to get guillotined? Tune in next week to find out!)


It might not take place in nineteenth-century poorhouses, but A Tale of Two Cities is quite dark and intense as it rollicks to its climax. It was definitely worth the read once I got into the story and I understand why it's a popular starting point for reading Dickens. 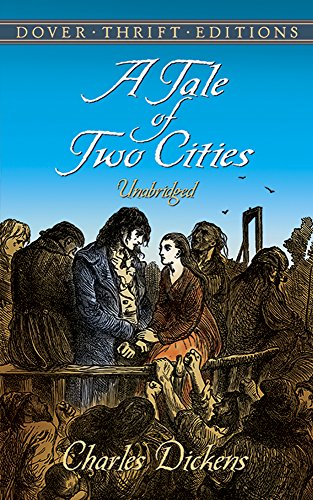