In a world of dragons, ogres, maidens, faraway places and a royal waiting to be married? In a land of fun, magic, love and hope there is also evil, misleading terms, death and above all the wrongness of actions. Born into this world is little Eleanor, who goes by Ella. She explores this world of magic, but at a price. Her curse was to be obedient, following anyone and everyone’s command.

Fairies are kept quiet, not doing any big magic, hiding themselves from the human world. That is all of them, except Lucinda. Lucinda flaunted herself being a fairy, showing up at births and weddings, giving them such splendid gifts! Except those gifts are not wanted by the newly born child or couple. At one wedding she gave the gift that they shall be together forever, not allowing going more than a few feet (or meters) without being drawn back to the other. After their first fight, they will never have the time to get over their anger by being away from the other. What if he hates her sneeze? What if she hates how he eats? Because of Lucinda they will want to divorce in a month, but can’t. What Lucinda doesn't know that her gifts are not always wanted. But once she gives them, she won’t take them back.

Ella was born with the gift of being obedient, given to her by none other than Lucinda. Now the gift seemed harmless when you first look at it. So she has to obey her parents and teachers, because if she doesn't she’ll feel ill till she does. But what if someone says she has to not drink for a week? Well she has to do it. What if someone told her to walk a thousand miles? Then she has to do it. What if someone said she had to kill everyone she ever met? You guess it, she has to do it. Her mother ordered her never to tell about her curse, that only she and their cook could know. Ella had to learn to deal with her curse, comes to term with who she is as a person, and overall break the curse so that she can live happily ever after.

Gail Carson Levine best known book is Ella Enchanted. It won the Newbery Honor award in 1998, for a good reason! This story takes the fantasy world with a girl who has to be obedient, but a rebel at heart. Top it off with a charming prince who she couldn't be with (because of the curse) and you have a great story. Ella hit the big screen in 2004 with Anne Hathaway as Ella. The story was dry at parts, and very obvious on where it was going, it was a good read, and a great boost up for girl power. 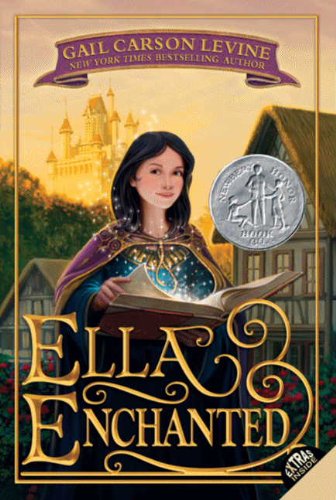 A tale as old as time!