Technology is moving fast into the 21st century. We have developed modernize agriculture, as well as smart phones you can wear as a watch. It makes sense that in the future our technology will start to improve ourselves, starting with cyborgs. After terrible accidents people can replace lost limbs with a mechanical one that (connected to your brain) will do the exact same thing the real body part did. With this new age technology, it can be used for good, yet also for evil.

Cinder is a cyborg. After a horrible car accident, she was left with a few good body parts; the rest was replaced by metal. Becoming a cyborg at age eleven Cinder does not remember anything before the accident, except that it killed her parents. Later she was adopted by Linh Garan, who took her out of Europe to New Beijing, where his wife and two daughters live. After living with the family for a few days, Garan fell ill with the plague (called letumosis) and was taken away, leaving his wife, and now three daughters to fend for themselves. The mother, Adri, hated her new cyborg stepdaughter, blaming her for the death of her husband. Cinder wanting to prove useful to the family became an excellent mechanic. The family relied on Cinder for income, while secretly hating her, all except the youngest daughter Peony. Cinder who if not for the Linh family would be alone back in Europe, instead she spent her time at the market, planning on her escape.

Cinder is now sixteen years old, and have been living in New Beijing for over five years. The market where she and her android (a type of personal robot) Iko spent their days. They days blend into each other until one faithful day. Prince Kai, the handsome young prince who’s farther suffering from letumosis, came to Cinder’s stand asking her to fix his android.  Cinder agreed, for how can you say no to the Prince? Cinder’s sisters were obsessed over Prince Kai, both determine to marry him. Cinder before she even looked at the android lost her chance, as Peony falls ill with letumosis, which was Cinders last hope of staying in the family. Sent to the doctors as a “volunteer” they were going to inject her with letumosis, to help the doctors developed the cure.  When Cinder learned that she was immune to letumosis, she decided to stay and help the doctors use her blood as a sample. There she learned more about herself, her family, past, but most importantly her and Kai’s relationship developed.

Marissa Meyer takes the classic Cinderella tale and twists it into strong, independed, cyborg Cinder. The writing was good, same with the plot; I just could not picture an android in my mind. First I thought it was like a phone, but then Iko wore Peony’s dress, they must be more human size. I wish the author put more detail about them, and about what a cyborg is. We learned how Cinder became one, but how does that change their social status, or how it affected them later in life. Cinder is a great twist as you can compare her to be a stronger and smarter version than Cinderella. The ending was a shock as Cinder has a major decision to make, one that can lead to death, or to her prince. 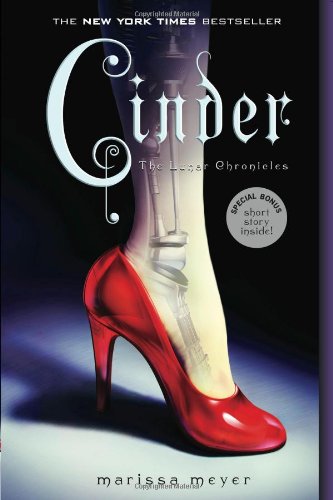