Our brains are strange things. A lump of matter in our head that holds information and memories since we were born.  Yet in our world amnesia exists. A disease that takes away our knowledge and memories for long or short term.  It made us realize that the things we hold dear to us can simply be gone as if you never knew them.  Yet what if someone took those away from you.  Took away your memories giving you a clean blank slate. You know how to walk and cook but not who your friends are, what you like and dislike. Who you truly are.  What if those things were taking away from you? Would you live on, or try and get those memories back?

Ever newbie starts of in the box. They wake up in this cold, dark box that is shooting up. When the box opens at the top it releases the Glade. The Glade is a little place its resident call home. Place in the center of the maze, boys ages vary from twelve to seventeen, as they made the Glade into a community. Surrounding the Glade is a maze, one with no known exits. Each day the runners spend all say exploring the maze, looking for the exist. At the end of the day they return to the Glade and mapped out what they explored. At dusk the walls close, sealing of the maze for the night. During the night the Grievers run about, killing any living thing left in the maze. The residents tried everything the escape. But after living there for two years they are no closer than they started. It was not until the last two newbies (or as they call them greenies) arrived and triggered the end, did things really began to change.

“My name is Thomas” was the only thing Thomas remembered. Not his last name, whom his mother is, even where he live. Waking up in the box that is shooting to the sky, only his name is what he can recall.  Yet he knew he has been in the Glade before. Something made it familiar made it feel like home even if everyone was hostile to him. Making a friend and an enemy in day one, Thomas would not let the idea of the maze go. He was curious to what it was, and whom the creators are, and why are they here. Yet he is determined to become a runner. Working at it each day, even if he breaks to rules to prove himself. Yet when the last newbie shows up, Thomas knows he’s different. Now it is up to him and the other newbie to save the Glade and get everyone out alive.

James Dashner did an okay job with this novel. Being the first in a trilogy I’m not sure which direction it is going in next.  The lack of personality in the characters was the thing that did me in. I could not attach to Thomas for I found him a jerk, the leaders of the Glade were wishy-washy with how they treated Thomas made me wishy-washy about them. Even Chuck was not in there that often and when he was Thomas was a jerk to him. The whole plot was based in the withheld information from them. The only way they survived was Thomas remembering little bit of information at the appropriate times. For them all to have an above average IQ, they did not really do anything smart. It was an okay book, and was a manageable read.  It was the fall of 2014 blockbuster hit in theatres making the book extremely popular once again.  It overall was not a bad book, and the concept was cool. In hope the next two books are better than the first. 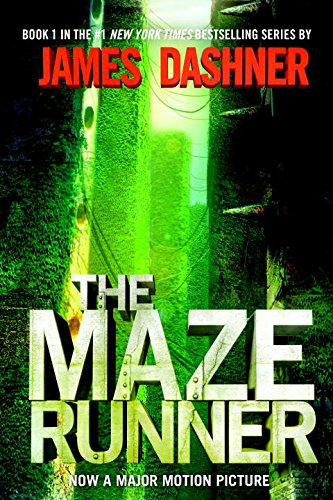