City of Glass (The Mortal Instruments, #3) by Cassandra Clare

Clary’s life has done a complete one-eighty since the start of the series. Now she is full immured in the Shadowhunter world. She and the Lightwoods’ are traveling to the City of Glass, the ancestral home of the Shadowhunters, the place where she can find the medicine that she needs to save her mother. Yet Jace is standing in the way. For some reason, that Clary cannot identify he is fully against the idea of her coming.  Clary, whom never listens to anyone, saw that Jace did not want his little sister trailing after him as a threat to her ego, and made it her life goal to get to the city. And so begins the trials and tribulations of Clary and Jace’s new adventures.

Clary was shocked that Jace did not want her to come. Why would he? Clary knows nothing about this world, which she only knew about a few months ago. And now she wants to come with him to the capital for the biggest meeting since the first time Valentine attacked. So Jace along with Simon struck up a plan on how to leave without Clary, which would have worked, except for the unexpected attacked making Jace drag a half-dead Simon with him through the portal.  When Clary found out she was not pleased. Using her ‘new magic’ she created her own portal to get her and Luke into the city. Sadly Clary was not custom to the rules, and did not know that you cannot connect a portal into the center of the city without someone on the other side expecting you. With that Clary landed herself in the middle of a lake, which is poisonous to Shadowhunters. Without Luke she would have died on the spot. Once there she was shocked how cold Jace was to her, it was like he did not want her there. Crying for the fact that Jace hates her, Clary meets her dark prince who goes by Sebastian. Clary and Sebastian insistently clicked, as Clary told him the dirt of why she is here. To save her mother.

None is well in the Shadownhunter world. Valentine is once again alive, and with two of the Mortal instruments, it is only time till he finds the third. With two of his children in the city itself, the Clave and Aldertree, the new Inquisitor, have to take some drastic actions.  Starting with Simon. A vampire in their capital city? Brought by Valentines son? They took Simon as a spy and locked him in their prison. Jace and the Lightwoods visit him, but not letting Clary known, in case she does something drastic, and break another law.  Clary and Jace soon get back on speaking terms, only to be broken again. Yet as they discovered something new, about their family, and why they are act the way they do.

Cassandra Clare what are you doing with this series. As the third book (that was supposed to be the last) it is clear that this is far but the end. Clary is becoming not the heroine but the damsel in distress as it seems as if she is blind and uncaring to what is going on around her.  Does she not know what harm and havoc she is causing? Does she not realize how unprepared she is to this world.  It seems as if all she does is mess up and expect Jace and the Lightwoods to forgive her, only to let her do the same thing again. In this series the writing is good, so is the plot. The whole Clary and Jace thing is getting dry and confusing. Unless Cassandra Clare pick up her writing and make Clary into a person and not just a lump of whinnying 'why me', then this series is going downhill. 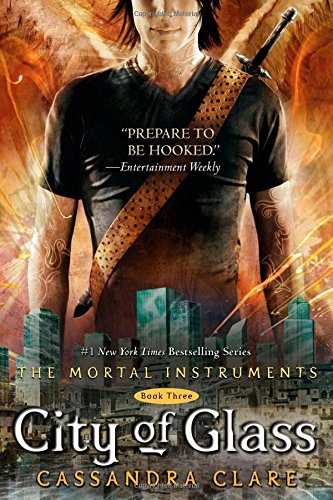 Please let this series get better!