It has always been the Republic against the Colonies. Or at least as long as Day and June came remember. The Republic always training solders to send out on the front lines against the Colonies. The Colonies whose land was full of bright colors, where every house had electricity twenty-four/seven.  The promise land. After Day, the Republic’s most wanted criminal, and June the Republic’s prodigy, escape Day’s trial, they are forced to flee. But where? With Day’s injured leg, and June’s faith being torn into pieces, their only hope is that the rebels will take them in.

Day’s life has never been easy. From the day he was born, his family had to fight for their rights. Even after his supposed death after he failed his trial, he went into the streets and became the criminal to the Republic know as Day.  After the disappearance of his father, Day’s family became his number one priority. With his mother dead and brother John sacrificing himself for Day, all his protection goes to his little brother Eden, who is sick with the plague and under the Republic’s control. Day’s life mission is to get Eden back, where he will fight, lie, and ultimately betray anyone who stands in between him and Eden.

June’s life has always seemed perfect. A loving brother, money everywhere, and being the Republic’s darling June could get away with anything. Yet June’s life has been anything but perfect. Her parents were murdered for knowing too much, her brother killed by his best friend for hacking the network. Even June has been lied too and betrayed by her own people. So it is no wonder she snapped. She saved Day not only because she loves him, but because he simply was not the one who killed her brother.  Yet now that she and Day are against the Republic, June’s loyalties are tested. How can she be loyal to Day, but cannot turn her back on the Republic.

Marie Lu did an amazing job in this middle book. Normally the second in a trilogy is boring, as it tells the middle part, with no dramatic ending, yet not the intro to the story. Yet she makes it work using her two point-of-view story of Day and June. This time though she wrote Day in a bright blue fount, which I cannot classify as cool or annoying.  Yet the writing was good and I loved how she made experience the chemistry between Day and June. How neither could apologies, or say what they truly meant. The ending was a heart breaker, but all I can hope is that it is not the end of June and Day. 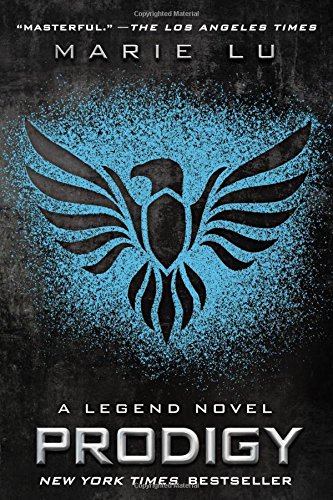 An amazing series! Cannot wait to see how it ends!

View profile
Very well done review! I LOVE that series too! I'm on the second book just starting its a great series! Love the review btw. ;)