The Henley. One of the most famous museums in the world.  Located in the south of the United Kingdom, it was meant to be a fort. That was until Kat’s team of teenage thefts got to it. That is how the spent the first book, staking out the Henley. Waiting for the right moment to strike. Yet they were no there to steal, they were there to take back the hidden paintings, that were at the Henley.  After succeeding the heist, the group dissolved, as Kat went own her own to do “small” and “easy” missions, leaving the rest of her family and friends in the dusk.

Kat has been away for a while. From Rio, to Moscow, Kat has been doing missions by herself, never asking help from her family or from Hale.  Yet there came a time when she did have to go back. Back to Uncle Eddie’s kitchen and into the cold shoulder grasp of her family.  Yet Kat was not done yet, when an old woman and her grandson confront Kat and Hale at the airport. They convince Kat and hale to steal the infamous Cleopatra Emerald so it can be returned to its rightful owners. Where Hale wanted to turn it down, it was Kat who was looking for the “rush” who agreed to do it.  Kat gathered her team and together they went off to pull this heist.

The Cleopatra Emerald was not just an ordinary gem. It was said that when Cleopatra broke her necklace in half giving the other half which became The Anthony. Because she broke it, the necklace became curse, which is the reason behind their death. Yet it was not the curse that was keeping Kat away. It was the thought of Uncle Eddie. Who forbid anyone in the family to go after it, after his fail attempted that scared him straight.  Yet if Kat goes against Uncle Eddie, it would make her career (even more so after the Henley), but her family will never forgive her for it.  Yet Kat still goes on, determined for the rush. Not realizing that even she can get con.

Ally Carter did an amazing job for this sequel book. In my review I only gave you what happen in the first hundred pages, as I do not want to spoil it, and you have to know what happen in order to read the rest. I love how she made Kat into the “adrenaline junkie” girl, and it was Gabrielle who explains to Kat what “Needing Hale” and “Wanting Hale” were two completely different things. I loved how she tied Nick back into it, letting us know that he too is a main part of her teenage group of thieves. Kat and Hale are still at the friends/more-than-friends/do-you-like-me stage, which makes us wonder what the third book has in stall for them. I love how she incorporates the love of family, friends, the family business, finding yourself, and history into the series. I cannot wait to see what heist they pull off next. 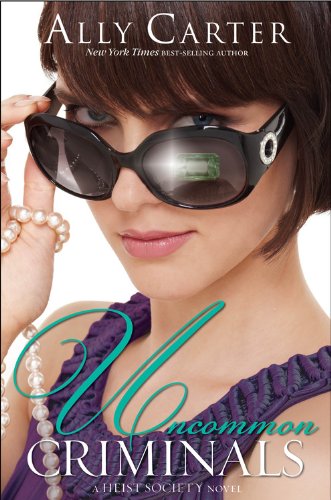 An amazing series, one of Ally's best.