Summer. A perfect time to relax, go on vacation, and have a little fling with someone.  That is exactly what Frankie had in plan for her and her best friend Anna. Anna lightheartedly agreed to the game Frankie came up with of having a ‘thing’ with twenty different boys the twenty odd some days they were in Zanzibar Bay. Only what Frankie did not know was that Anna already had a ‘thing’ with a boy. That boy happens to be Frankie’s older brother who died in a car crash one year earlier. Little SPOILERS can be found in the three paragraphs below.

The book starts off one year earlier at Anna’s fifteenth birthday party. It was there that she and Matt (Frankie’s older brother) shared their first kiss. From that night on Matt and Anna shared secret looks, touches and kisses away from others. Anna and Matt hated keeping this from Frankie, but Matt promise would break the news to her on their annual vacation in Zanzibar Bay.  This did not happen when days before they were to leave Frankie, Anna and Matt got into a car accident. There Anna had gotten some bruises, Frankie a scar across her eyebrow, and Matt had unfortunately died. Matt died keeping their secret, and Anna swore so would she.

A year later the Matt’s family and Anna were still not over his death. Frankie turned to cigarettes and revealing clothes trying to act out to get her parents’ attention. But Frankie’s family has an idea that changes everything. They were still planning on going to their annual vacation house in Zanzibar Bay, but to fill the gap left by Matt, they invited Anna to come along. Anna goes along with it, and even settled to play Frankie’s twenty-boy game.  For it was time for Anna and Frankie’s family to move on.

The Game started as soon as Anna and Frankie went to the boardwalk when they met two very manly boys who took interest in them right away.  Two down, eighteen left. It was on morning two that Frankie and Anna met two extra-ordinary boys known as Sam and Jack. Sam was the boy that made Anna’s summer just short of perfect. The summer was going great with only small hiccups in the plan. It was not until Frankie read Anna’s diary that all hell broke loose. Anna cannot understand why Frankie is so angry. Anna hopes that there is a way she can fix it. Read along and see how hidden secrets between two best friends can truly bring it down in flames.

Sarah Ockler this is truly a different book. The whole concept is emotion as it is about have a thing with the older brother of your best friend, who died a year ago. That is a pretty deep topic. The one part I did not like about this book was the big deal of Anna’s virginity. Truly this is not a big deal between teenage girls, as this book gives the wrong message about it entirely. Losing your virginity to a guy you just met while still in high school is just… wrong. Other than that whole part the book was well written and had a true magical air about it. 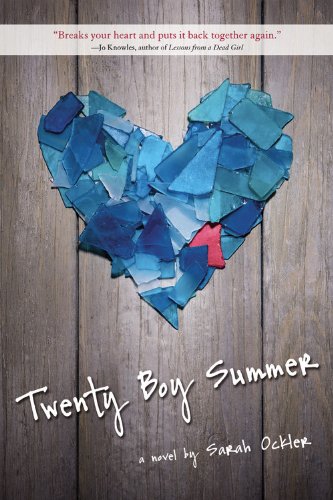