That girl that has everything. From the hair, body to the friends and the clothing. She has the smarts, the beauty and the personality that everyone can fall in love with. Too bad for Annabel that’s just the girl she model for. Annabel Greene this year is the girl that has nothing.

Summer is the perfect time for the big dramas to hit. The warm air, long nights, parties every weekend is the perfect time for friendships to be made and broken. That what Annabel experience when her best friend Sophie “caught” Annabel “hooking up” with her current bad boy boyfriend Will Cash. Dropped like a hot potato, Annabel has been dreading going back to school, and for good reason. Sophie still with Will made a goal to make Annabel’s school life as miserable as she can. Sophie succeeds, until she meets Owen Armstrong. Owen towers above everyone at the height of 6’4”, yet his reputation follows by punching out the school’s jerk, and the rumors of him getting in a fight at a club. Yet after Annabel’s public show-down with Sophie, he comes to her and offers her aid. From there they slowly became friends. The topics they talked about? Well there was only really one: music. Owen was music-obsessed, and he considered himself emilited music listener, meaning he found a fountain dripping for five minutes music. Yet Annabel finds him fascinating, and started getting up at 7am on Sundays to listen to his local radio show. Their friendship grew strong until it reached the breaking point. At that point Annabel bolted, leaving Owen alone and confuse behind.

This book, like many others Sarah Dessen’s have a second problem. This is her family, who used to live together happily in their glass house. In her family were her mom, dad, oldest sister Kristen, and the middle child Whitney. It as Kristen, who first started the modeling. Their mother eventually gave into Kristen’s demand and took her to the audition, which she landed the world. Whitney being younger followed her older sister footsteps by becoming a child model too. This is how Annabel ended up being a model at only nine months of age. When their grandmother died, modeling was the nothing thing that made her mother happy. When Kristen graduated, she moved to New York City to continue her modeling career. When Whitney graduated, she followed again in her sister’s footsteps and move in with her in the city. This is where all the problems started. When Kristen in the city got bored and finally quit modeling for work and school, Whitney dove head first into the modeling business. And what is the one thing models have to be in order to survive in the world. Pretty and Skinny. When Whitney was already naturally stunning, it was there in New York City, where she became skinnier, and skinner, and skinner. During Christmas break Annabel walked in to Whitney passed out on the bathroom floor. Whitney as it turned out was anorexic. Forced to live at home Whitney spends her time sulking around the house. Annabel feels lost to her sister, unable to help or connect. Her hatred for modeling grows as the year goes on, yet unable to speak up and take away her mother’s only happiness.

Sarah Dessen surprise us all once again with this truly wonderful book. This book deals with the troubles that female everywhere deal with, friendship ending badly and family drama. This book has many sad events, yet many good ones too. Annabel lost a friendship, but gain another, and repaired and old one. Her family got on track in the right direction, and she finally got to tell the truth of what happened that ended her and Sophie’s friendship. Even if she had to tell it in court. 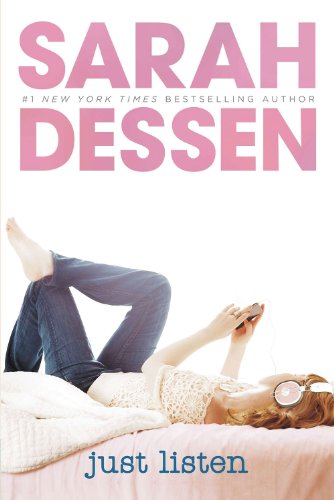