As You Like It by William Shakespeare | Teen Ink

Well. You know the rest.

As You Like It begins with two inseparable cousins: Rosalind and Celia, daughter of the Duke and her cousin. When Rosalind's father Frederick usurps the throne, Celia and Rosalind flee to the woods in hopes that they can recover the former Duke, who has achieved a small-but-loyal following in the woods. Celia and Rosalind, along with the clown Touchstone, disguise themselves as a page and his mistress in order to make it through the woods unharmed. Meanwhile the gentleman Orlando is forced to flee into the woods as well on death threats by his older brother Oliver. Because two men and two women can't come from nothing in a Shakespeare play, they are destined to meet.

Orlando finds refuge in the Duke's following and begins posting love poems in a tree for a girl named Rosalind he knew in the kingdom. There are no coincidences in this play, and it is the same Rosalind who fled to the woods. She stumbles on the poems and Orlando, herself in disguise, and pretends to counsel him in love, telling him to pretend as if she is Rosalind and romance her as he would his love.

Orlando's brother Oliver enters the woods, too, himself conflicted over the persecution he gave his brother. He happens to come upon Orlando in the woods being attacked by a lion and saves his life. Orlando acquaints Oliver with Celia and she, too, falls in love. Touchstone, who has been serving as comedic relief all this time, is forcibly married to the shepherdess Audrey. After a lot of complications, Orlando and Rosalind, too, find each other and fall into deep, deep love.

As You Like It is a story that could have been written today; we still write stories about teenagers who fall in love after a week of knowing each other. We still enjoy romantic comedies in which love persists, but not in a very perfect way. We are all secretly the character Jaques, the play's cynical observer, who watches the love bloom and persists in his views: that this is a story that has happened before to us all and will happen many times before it is retired.

Old this play may be, but its values are anything but ancient. 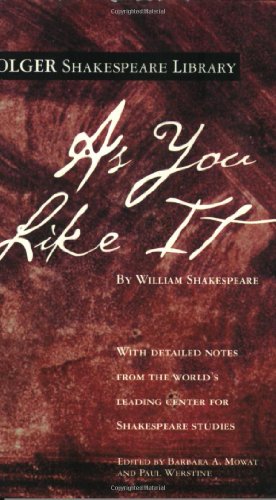 
Buy from Amazon
The author's comments:
It's only a matter of time before the person with the username "honest_iago" writes a review about Shakespeare, eh?
Post a comment
Submit your own