What Happened to Goodbye by Sarah Dessen | Teen Ink

What Happened to Goodbye by Sarah Dessen

Being the new kid is tough. No one knows your name, what you have been through, anything about you as a whole. You have no classmates since kindergarten, nor the teacher your older sibling had. You are simply new, ready to be judged by the local kids and try to find a spot you can slip into in the line of society. Mclean knows all about being the new kids, after four moves in the past two years. When she moves though, she not only changes her location, but herself.


Mclean life was grand, until the day came when her parents filed for divorce. Blaming her mom for the spilt, Mclean followed her dad as he travels around as a restaurant consultant. Leaving her unhappy past Mclean picks up a new identity in each town she goes too. In the first town called Montford Falls, Mclean changes her name to Eliza acting like Mclean, but a lot more confident. Eliza joined cheerleading and hung out around other jocks. From there she went to Lizbet, the queen of drama. She took dance and drama class, wore turtle necks and smoked. The next town she turned herself around and became Beth, joined student council, worked on the yearbook and school paper and tutored children. The next town was one the book was written on called Lakeview. There she was going to be Liz, the party girl who knew how to drink. But before Liz could introduce herself, Mclean was already known. How could Mclean become herself, when she does not even know who she is anymore? Mclean struggles as she finds herself, and come to terms with her past. Making great friends like Riley, Heather, and Deb, and making a special someone. Mclean finds herself, her home.


The main theme in was the search for self-identity. Self-identity is the collection of beliefs of one self, answering the question “Who am I?” Mclean lost herself as she moved from her home town Tyler and started making all of the different identities. Mclean spends this book on the journey to find her self, and who she really is. A smaller but still important theme was Mclean and her family issues. This book is perfect for a teen whose parents are going through a bad divorce. Mclean blames her mom for what happen, for it was truly her fault. Mclean needs her mom, though, like every teenage girl, she just has to get over what happens. A quote from the novel describes perfectly what divorce is like: “But in the real world, you couldn’t really just split a family down the middle, mom on one side, dad the other, with the child equally divided between. It was like when you ripped a piece of paper into two: no matter how you tried, the seams never fit exactly right again. It was what you couldn't see, those tiniest of pieces that were lost in the severing, and their absence kept everything from being complete.” – Sarah Dessen.


Sarah Dessen is an amazing writer. She has written a total of eleven books, with “What Happen to Goodbye” being her tenth. All her books are amazing, and I believe it is mandatory for all teenage girls to read at least one of her books. Even if you are not into the typical teenage girl book, these are the exception. ‘What Happen to Goodbye’ was the best one yet. The theme of family issues like divorce is old, but still needed for a lot of people are going through that every day. The main theme of self-identity is not new but not well expressed. Many teenagers go through the phase of not knowing who they are. Although most do not take it as extreme as Mclean, but many wish they could. Mclean started the book as not knowing who she is, and in the end she finds herself exactly in a better condition than when she left.

“It was amazing how you could get so far from where you'd planned, and yet find it was exactly where you needed to be.”
? Sarah Dessen, What Happened to Goodbye 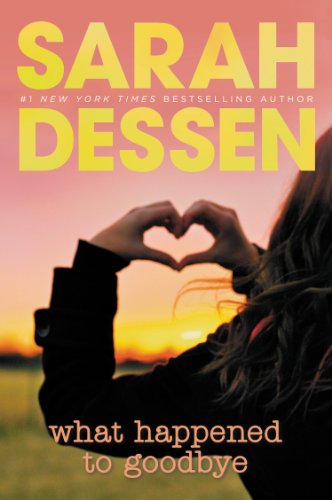 
Buy from Amazon
The author's comments:
Such a inspiring book! Mclean feels so real and the events are super realistic. Another perfect Sarah Dessen book!
Post a comment
Submit your own