How to be Popular by Meg Cabot | Teen Ink

How to be Popular by Meg Cabot

Popular by definition means: liked, admired, or enjoyed by many people or by a particular person or group. We all know who’s popular and who’s not. It’s one of the rare things in the word that can be gained not born to. Although it may seem like it at times. Yet it’s hard to move up in your social ranks from near the bottom to get to the top. Yet Steph manages to do it all because of the book.

Steph Landry dreams of being popular. Ever since spilling a drink on popular girl Lauren in the sixth grade, Steph has been tormented with the phrase “Don’t pull a Steph Landry” ever since. She finally had enough and decided to start 11th grade with a bang. Given a box of books from her soon-to-be-step grandmother, she finds one call “How to be popular” and she knew this was her ticket to the top. Following the book rules she manages to become popular from the start of the year when she comes up with a big fundraiser for the grads (grade twelve) annual trip. From there her popularity grows till she’s at the top.

Yet when she was at the bottom she had friends. Jason and Becca. They (especially Jason) do not understand why she wants to be popular. She does not ditch them, but Jason won’t have anything to do with her and Becca is convinced Jason is her “One”. With the drama of Jason, the hopelessness of Becca’s romance fanaticises, her grandfather is getting married which her mother is not happy about, on top of become popular with a whole new set of friends. Yet when the popular people ask her to do something that will hurt her grandfather, his soon-t-be wife and Jason, she’s not sure she can do it. But can she say no and lose her popularity?

Meg Cabot is known for her teenage/middle school girl books. And this one is no exception. Filled with drama, boys and other thing girly, this is a perfect book to any girl who wants to be popular. Her writing is like in her other books, ordinary but good. It’s kind of like a diary for it gives you the day and what time she’s writing about. Although I refer it not to be, for there were 36 chapters yet the book only took place between August 26 to Septembers 3, which is not a lot of time. Yet I was happy with the ending believing that Steph got what she deserve yet still had a happy ending. Just remember guys, don’t pull a Steph! 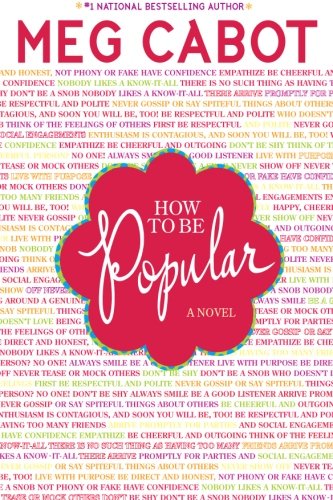 
Buy from Amazon
The author's comments:
A really funny book. And as a high school student it is not always true that the most popular people are also the nicest.
Post a comment
Submit your own