With a big family, from a small town, that plays baseball, Edward’s Eyes seems to be about the American dream. Though this family may appear to have a perfect life, they are not a typical family.
Jake is the fourth child in his family, with two older sisters and an older brother. They call their parents Maeve and Jack instead of Mom and Dad. Jake has a pretty normal life until the day his parents bring home the new baby, Edward.
Edward changes Jake’s life completely. When Maeve hands Edward to Jake the first thing he notices is Edward’s eyes. As Edward grows Jake - as his siblings before him - is responsible for teaching Edward everything he needs to know.
Edward has always been wise beyond his age and known things he shouldn’t know. When Maeve and Jack tell the kids they are expecting another baby, Edward states that it will be a girl and they will name her Sabine. When the times comes Edward gets up and walks to town in the middle of the night to make sure he doesn’t miss the birth of his new sister, Sabine.
Sabine loves to watch Edward play baseball. He calls out his pitches to her as she sits watching on, family friend, Albert’s lap. Albert and his dad, Trick, have always played baseball and love to come watch the daily summer games. After practicing everyday, rain or shine, Edward perfects the elusive knuckleball. For that one glorious summer, everyday revolved around baseball, until one fateful day tragedy strikes.
Edward's Eyes is a wonderful book about the not so typical American dream life. With family, baseball, and tragedy, the story conveys a strong message of hope, love, and struggle. Edward's Eyes is an extremely well written book and will always be one of my favorites. 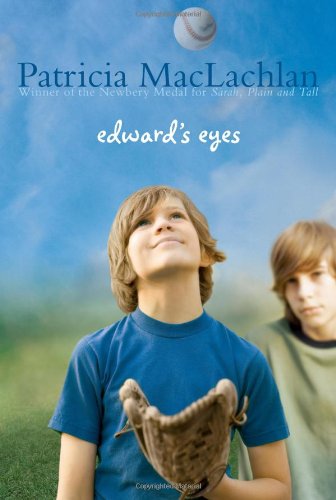