Act 1
After the first vote, I was a little surprised that so many people voted guilty! Eleven people already had their hand raised up for guilty, so I had to vote for not guilty. It is not so easy for me to send a boy off to die without talking about it first! Right now I’m not sure if I believe this kid’s story or not. But, he has been kicked around all his life. Jurors 3, 4, 7, and 10 just seem so sure that he is guilty. But I don’t want to change their mind. I just want to talk about it. Juror 10 says that the woman across the street is absolutely right. But how can the woman be really sure when there was an elevated train passing by? Many other Jurors just say he is guilty, and have no reasons. Even though he has a pretty rough record, you can’t blame him. His father beat him up regularly, and he lives in a slum! Juror 3 then launched into a pretty embarrassing story about his own son. Maybe that’s why he wants this kid to get convicted- it’s because he reminds him of his own son! Everyone looked at me like I was a dangerous killer when I pulled out that switch knife. I only wanted to prove to everyone that it is just an ordinary knife, and that someone else could’ve stabbed his father with a similar knife. I also argued that maybe the reason no one remembered him at the movies was because he snuck in. Finally, I proposed a vote. I was a little nervous. I hoped someone would say he was innocent, so he would not have to die. Thankfully, one person voted not guilty. I am now more believing that he is innocent.
Act 2

Juror 3 seemed super aggravated when he realized someone else had changed his vote. All of a sudden he exploded at Juror 5 and seemed so certain that he was the one who changed his vote. But, Juror 9 finally admitted that it was him would changed his vote. His argument was that I left the verdict up to those other eleven jurors and that he is giving me support. I am so grateful towards this caring but old man. He seems to really understand this old man. Maybe the old man had wanted attention. I can infer that Juror 9 was once like him too. He said he had admired my courage. Also, I do not really think the old man could have heard the boy scream, “I’m gonna kill you.” with an elevated train passing by. They make a lot of noise. The boy wouldn’t have screamed that for the whole neighborhood to hear, he is much too clever for that. Even if he did, everyone uses this phrase in everyday life. It does not really mean he wanted to kill him. Juror 3 said that whenever someone says this, they mean it. Juror 10 seems so disinterested- he said his bedroom was down the hall somewhere! When Jurors 3 and 9 started arguing whether it was 15 or 20 seconds to get to his front door, Juror 3 contradicted himself. He said that half the time he was confused. Just before, he kept on saying how the old man was sure of himself. I don’t think he really cares about this boy’s life! He is doing this for his own enjoyment. I tried imitating the old man trying to get to the front door. I took 39 seconds! This is enough proof to show that the old man was wrong- it could not have been 15 seconds. Juror 3 got infuriated and started shouting about how this boy has got to burn. I am truly sorry for him. He is just like a sadist. He became so enraged that he shouted at me, “I’ll kill him!” I looked at him, and said calmly, “You don’t really mean you’ll kill me, do you?” Once again, Juror 3 has contradicted himself. I have a feeling that this boy is actually not guilty more and more now.
Act 3

Juror 11 says that we should appreciate the democracy in America. I very much agree with him. We had another vote, and it was six to six. We could not agree on anything, so we had to decide if we were a hung jury. The vote was six to six, again. Then, Juror 4 changed his vote to not being a hung jury. He wanted to hear more. He asked to reconstruct the killing, and he did the whole scene. Juror 3 demonstrated just the stabbing part again because Juror 2 was questioning it. I volunteered to get up, and he was so close to actually stabbing me. I could tell many of the other Jurors thought he was really going to stab me. Juror 5 realizes at that instant that a trained knife fighter would never have stabbed overhand- they always stab underhand. He has seen so many knife fights because he lives in the slums. I also made a point that it’s not possible that the boy could’ve killed his father because if he did, he would have to be dumb, smart, dumb, smart, etc. There is so much evidence to prove that there is doubt! This was so significant that it immediately changed the vote to 9 to 3, but now in favor of acquittal. Juror 10 started ranting about “those people”. He is stereotyping again. We all got up and turned our back to him because we do not want to be associated with him. At last, Juror 4 got him quiet. Juror 4 still thought the boy was guilty because the woman across the el tracks claimed she saw the murder being committed. But, she wears bifocals! No one wears glasses to bed, and no one would put them on casually in the middle of the night to look out the window. She probably just saw a blur. This changed Jurors 4 and 10’s mind. Now, Juror 3 was all alone. I asked him for his arguments, and he had none. I think he caved in from all the pressure and he screamed, “Alright!” At the end, it was just the two of us left in the room, and he was playing around with the switch knife, as if he was going to stab me. I said “Not guilty,” and made sure he said it too.
Final Reflection

Jurors 3, 4, 7, and 10 seemed so positive that he was guilty in the beginning. I have come to realize that Juror 3 does not care if this boy dies or not. I think at the only reason he said not guilty was just to get it over with. Juror 4 seems to really know what he is talking about. But, he just talks about facts, facts, and facts. He does not seem to consider anything else. Juror 7 acts like he has so much more better things to do than do this honorable duty. Juror 10 is much too biased of a person to serve on a jury. We definitely did not have an impartial jury. The deliberations were very thorough at times, but not explained at all at other times. I just wish it didn’t have to be so harsh and dramatic! I have learned that it is okay to stand alone, and it takes great courage to. You should always fight for justice and what you believe is right. Believe in your instincts, and always have hope too. From this experience, I have learned how to deal with bigots and sadists. I have learned that people change. In addition, I believe that in the future if I ever encounter an event such as this, I will know exactly what to do. 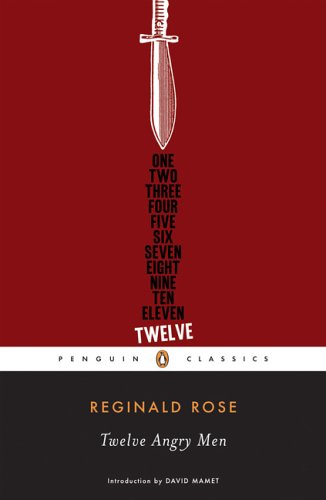 
Buy from Amazon
The author's comments:
I am writing as if I were Juror 8, if you guys didn't know!
Post a comment
Submit your own