January First: A Child's Decent Into Madness by Michael Schofield

Imagine having to watch your daughter slip away, where 95% of the time she is in an imaginary world called, Calalini, hallucinating. She’s a genius with a high IQ of 146, but she has this harrowing illness. That illness is called Schizophrenia.

January First: A Child’s Descent into Madness and Her Father’s Struggle to Save Her is an inspiring non-fiction novel written by Michael Schofield. It’s about his daughter, Jani, and his struggle to save her from a powerful, harrowing and frightening illness.

Throughout the novel, the author describes his and his family’s life with Jani, who is an extremely intelligent, precocious, yet violent and eccentric girl, who is surrounded by imaginary friends like “400 the cat”, and “Wednesday the Rat,” who often bite and scratch her when she does not do what they want her to do. They tell her to jump off buildings and to hurt her younger brother, Bodhi.

Jani’s behaviour ranges from her group of imaginary friends, a devotion to Jani’s made-up world of Calilini, and a lack of social skills and lack of interest in interacting and playing with peers her age to sudden angry outbursts of rage, where she harms both herself and others.

In the beginning of the novel, we see Jani’s dark side, the illness, when the author describes Jani’s rage. Bodhi is sleeping, and Jani decides to turn the volume of the television up. It goes louder and louder and louder, and Bodhi wakes up and begins to cry. The author describes how he goes into the kitchen to get some formula to calm Bodhi down.

But before he can feed Bodhi, “Jani calmly walks around the coffee table that separates her from Susan and Bodhi. Susan starts to get up, recoiling, twisting to shield Bodhi. Jani reaches up and drives her fist into Susan’s stomach, just below Bodhi’s dangling legs.” Michael restrains her. “If you tell me you won’t try to hurt Bodhi, I can let you go,” he tells her. “I have to hurt Bodhi,” she answers, in a voice, Schofield writes, “like she is being forced to hurt him.” “I have to,” she continues. “…I want to.”

This small selection of quotes found in the beginning of novel illustrates what these two parents are dealing with including: vivid, frightening hallucinations, desperate violence, and out-of-control rages.

As Michael and his wife, Susan, begin to realize and understand what Jani is going through, they realize that psychiatrists, psychologists, therapists, and other professionals may not even necessarily have the tools and expertise to help Jani get better, and become a “normal” child.

Jani’s story is both fascinating and troubling, but the story of her parents is almost as alarming , as Michael becomes extremely frustrated, helpless and hopeless, as he realizes that nothing he does can save his beloved daughter. He eventually attempts suicide by swallowing a whole bottle of Lexapro. Will this couple survive?

This book drives home the devastating reality of mental illness. For an illness like Jani’s, and even for many other less serious illnesses, the treatment is usually complicated, sluggish, and may never be 100% effective. This story also emphasizes how important it is for loved ones to advocate for their family’s and loved one’s needs.

Reading about Jani and her family’s struggles throughout the novel, makes one feel extreme empathy and sympathy for this family, as well as for others who are struggling. However, the author does tend to ramble on about not accepting his daughter’s condition, which tends to make readers, at times, increasingly frustrated. This novel sends a positive message to its readers: No matter how hopeless you feel, things can get better, as this novel ends positively.

January First: A Child’s Descent into Madness and Her Father’s Struggle to Save Her is definitely a recommended read, especially for those who are yearning for hope, and for those who need motivation during a difficult time. This novel will give hope to those who so desperately need it. 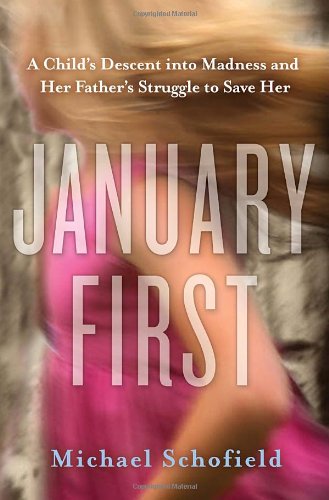 
Buy from Amazon
The author's comments:
My battles with mental illness and recovery truly play a part in the creation of this review...
Post a comment
Submit your own