Revenge. Served cold or hot is always good. When you get revenge on someone it feels as if you rule the world. That you are karma and you just got pay back. This is what three girls on sunny Jar Island get to do on their three victims.

Mary. Sweet little Mary the one in the center of the picture. In four years ago she left Jar Island with her family and never looked back. Why? Well Mary met a boy who destroyed her life. With her life broken her parents took her away. Now back for her senior year (except she’s a junior still) living with her Aunt. Yet when she seems him again, all those feeling come back. Mary cannot wait to get her revenge and make him feel what she felt.

Kat (the one on the left). Feisty, ferrous Kat. Kat’s had all the rumors, the insults, the cruel jokes made at her expense and finally she had enough. Yet what started these insults, the rumors and cruel jokes? They all start with her ex-best-friend Rennie. Kat was the master mind of the revenge gang. Paring up with bathroom-crying girl Mary and her other ex-best friend Lillia she wants to make all three victims pay.

Lillia the third and final member of the revenge group (found on the right). Over the summer Lillia did thing she was not proud off. Bearing the guilt of these actions made it her duty to protect her little sister from boys who would take advantage of her. Yet when Kat tells Lillia that her sister had a ‘sleep over’ and her friends Alex house Lillia want revenge. The problem is Alex, Rennie and the boy who hurt Mary was all her friends. How can she plan revenge on them, when they are laughing at her joke at the lunch table? Lillia definitely have the short end of the stick, but for her sister she will do it.

Jenny Han and Siobhan Vivian are both amazing authors. Their writing is the same as each other (not a good thing) so that it makes it hard to tell the difference. With such a unique topic they could have gone anywhere with it. The plot twists happed at appropriate times, and they have given you a typical high school look. They explored deep in the dark sides of Lillia, Kat and Mary giving us a true glimpse of what is inside of them. What would you do to get revenge, would you risk everything to make them pay? 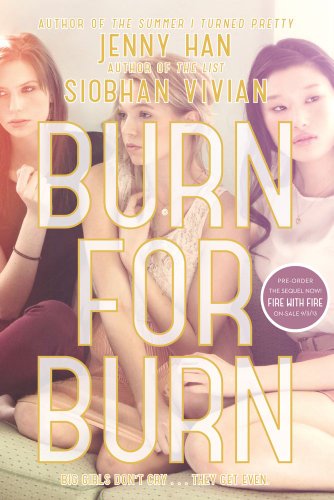