Rapture is the last book in the Fallen series. In the past three books we have uncovered the secrets of the love that Luce and Daniel share. Yet now time is finally running out for them. With Lucifer and the fall about to happen again; only Luce can stop it. The thing is; she does not know how. With that her and her fallen friends spread out and try to stop the fall and Luce learns the truth about herself.


Let’s just say this being the last book, I was pretty disappointed. Luce is still the same Luce as in book one. Yes she learned a lot of stuff, but she’s still the confuse weakling little girl she was when she first got into Swords and Cross. Here’s an example:
“She reached the window and saw that the two angels were facing each other. Her hands gripped the windowsill. She felt a small swell of pride-which she would never confess-about making it back into the library without help. Probably none of the angels would even notice. She sighed and slid one leg inside.”

Congratulations Luce! You can climb up to a window and have self-pity that the angles did not noticed that you did something so wonderful! Yes I know this was in the begging of the book; but it was the beginning of the last book, she had three other books to do little things like this. With Luce being so proud for climbing a window there are other problems.


One was that this book was supposedly over nine days. They could not have done this over nine days. Two weeks maybe but not nine days. Lauren Kate wants us to believe that Luce and Daniel flew across the Atlantic in a night and so happened to find what they were looking for the next morning. Yet in Lauren’s fantasy world I guess it was not as hard as Daniel made to look to find them.


Also the love triangle between Luce, Cam and Daniel is still going on. Now here I thought it died out in the first book. I do not get it. I can see it in the first, yet it died in the second and third so why brings it up again. It keeps going on saying Luce has “feelings” for Cam and how she “does not want to lose him.” Luce we all know you are with Daniel, and we know you are going to stay with him. So your “feelings” for Cam are going to stay that way. Thank goodness that Lauren had the mind set to make Luce stop flirting with Cam.

The ending of the book was typical. It made you cry and scream yet you know it is for the best. What Luce turned out to be though; was probably the biggest plot twist in history. And like gullible reader I did not see that coming. With what happened to them made me sad though. Always love finishing of the series feeling happy and in love for the characters. Yet the end of this; it just made me want to crawl into a ball and cry. Their romantic ending was more tragic than anything light. Yet I can see it was for the best; and it what Luce and Daniel deserved.

With this being the last book I would subject that no one read this series. You will just end up sad and hollow. Yet if you are already two to three books in then just finish. Who know maybe you will love it. The in love couple of Luce and Daniel have finally hit an end where they will fall in love for the last time. 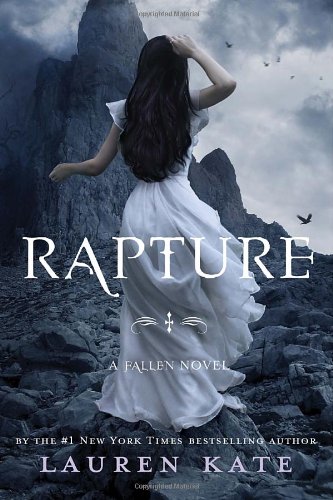