In the forests of Idaho, something is hunting. Every one who's ever met it has been found horrendously killed. There are no survivors, no evidence of what, or who it is. Only blood and screams.

Reed Shelton, police deputy of Willard, a small town in Idaho, had been planning this camping trip for months. Just a few days with only Beck (his wife), their two best friends, Cap and Sing, and wilderness survival expert Randy Thompson, away from the chaos of normal life.
But a relaxing camp-out quickly turns into a virtual nightmare, which might never end. Not until Reed finds Beck, who has been carried away in the night.

This is the story of Frank Peretti's novel, Monster, the likes of which may never have been seen before. His characters are fresh and life-like, the settings practically 3-D, the emotions grasping.

The main idea of the novel isn't so much gun-fire and monster-hunting, but revolving around the every-day battle between Christianity and Darwinism. Peretti cunningly winds the plot into the debate without making it an obnoxious bunny trail (such as a certain radio show (Jonathan Park) does). Rather, it is the base and structure of the entire plot, without which there would be no story.

It is a rather violent story, though, and I wouldn't suggest it to anyone under 13 years of age. It is somewhat a murder case, and some of the parts are pretty graphic. That and the descriptions of the 'monsters' can be really creepy (I couldn't go outside at night alone for about a month).

This book may not have a lot of publicity, but remember:
The woods are quiet, but there's something in there. 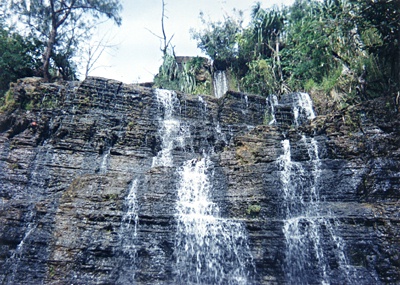 The author's comments:
My review for the thriller novel by the amazing and inspiring Frank Peretti!
(warning: This book is not for the squeamish)
Post a comment
Submit your own