Favorite Quote:
"If you have built castles in the sky, do not despair, that is where they should be. Now build the foundations under them." -Thoreau


When book lovers think about the “Wild West” as a setting for a story, they most often picture striking desert landscapes, rowdy mining towns, cowboy gunmen, and the name “Louis L’Amour”. In a Western novel, they want action, excitement, drama, suspense, as in Charles Portis’s True Grit, or Cormac McCarthy’s Blood Meridian. They do not think of a whimsical, small town coming-of-age story. But, surprisingly, this is exactly what the Great Brain series, by John D. Fitzgerald, is. A story about growing up in a little town on the frontier.

John D. Fitzgerald grew up in Southern Utah, the home of legendary western figures like Butch Cassidy and the Sundance Kid. Fitzgerald based the Great Brain series on his experiences growing up Catholic in a small, predominately Mormon town. Fitzgerald focuses the books on the exploits of his older brother Tom, who uses his “Great Brain” to swindle various children and townsfolk out of everything they own. Tom usually ends up in trouble for his shenanigans, although sometimes he puts his powers of intellect to good use to stop outlaws and other sinister characters.

Fitzgerald’s brother is reminiscent of another Tom in American literature, Tom Sawyer. The Great Brain books have the same pace and feel as Mark Twain’s famous story. Like Twain, Fitzgerald seems to capture the ups and downs of childhood perfectly. And of course, there is plenty of humor for both young and old, making it a great book to read aloud to children. Fitzgerald’s choice to stage the story in a Utah mining town might seem odd, but the adventurous land allows for plenty of thrills. At the same time, Fitzgerald is tackling important historical issues like nativism and religious tolerance. The book is an older one, but still perfect for our day and age. The problems that kids in America today face are not very different from those faced by kids a hundred years ago in an untamed land. Perhaps we will find that we can even learn a little from those children of the “Wild West.” 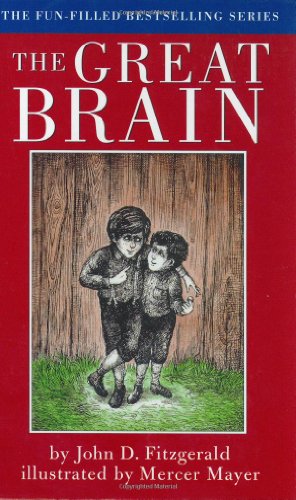