From the moment that I picked up this book, it was impossible for me to put it down. This is extremely rare for me, considering I am an unimaginably slow reader. It usually takes me a month or so to finish a good book, and I finished this one within twelve hours.

Warm Bodies is a twenty first century re-telling of Romeo and Juliet. Just like the story back in its time, it takes on a darker theme. This book follows R, a zombie living in an airport in the post-apocalyptic world. R is not the average zombie. Even though he looks like a mindless savage on the outside, on the inside he is just another human being trying to cope with his new world.

While on a hunt, R kills a boy, and eats his brain. He immediately inherits his memories, but his are stronger than most. They tell the story of his life, and his love, Julie. While in the chaos of zombies feeding, R decides not to kill her but instead brings her back to his home, an old 747.

This is where R falls in love with Julie. As he eats more of her ex-boyfriends brains, he learns more about the girl he saved. While R’s love is growing stronger so is his humanity. He starts saying more words in a row, and his thoughts grow more complex. The time will soon come when he must fight for his right to love and be human. His cause rubs off on other zombies, and they start becoming human as well.

I would strongly recommend this book to anyone who loves stories about the zombie apocalypse, or a good love story. Even if you are only one of the two, and hate the other genre, you will find yourself loving the book all the same. I for one, am strongly looking forward to the upcoming movie. 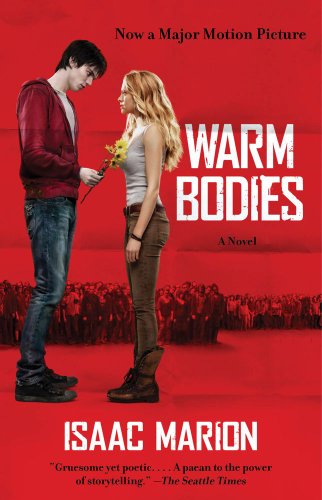