Rigged by Ben Mezrich is one of those books, you know the ones- the ones that leave you pondering about it long after you turn the final white page. Rigged is the ultimate business book because Ben Mezrich captures the the industry and presents it in the most alluring way as a non-fiction novel with traits of fiction. The story is presented in a way to make it appear that it is a fiction novel with all the plot elements necessary to form a compelling novel: an interesting plot, likable characters, a villain and an alluring setting.

Rigged is about a young Harvard graduate, John D'Agostino, who is offered a job with one of his long time heroes, an inspirational Italian man. D'Agostino grew up in Brooklyn and thrived to become something but upon graduation from Harvard he was stuck in a dead-end desk job. D'Agostino took a major pay cut to take the job at the Mercantile Exchange- the largest oil trader in the world, located in New York.

Despite the several setbacks before him he continued on. He was ridiculed by the rags to riches floor man who were known for their first fights on the trading floor- high school dropouts turn into instant millionaires with all the ferocity of a lion. His second day of work he wasn't feeling well but made the meeting none the less only to collapse due to kidney failure. He had to be immediately rushed to the hospital and he almost died. His work with the Merc Exchange later guarantees his advancement and eventually his involvement with foreign officials to build the spectacular Dubai exchange, while meeting tough opposition and death threats.

Anyone fascinated by business and anyone who loves a good story will absolutely love this story of perseverance and determination. The possibilities of someone as determined as D'Agostino are endless. As a student who only dreams of going to a school like Harvard and with similar family backgrounds it is a story that I find relatable to the determination it takes to succeed. Despite setbacks that would derail just about anyone else, D'Agostino's attitude and resolve was not dissipated by such circumstances. It is a truly inspirational and awing book- Rigged is a must read. 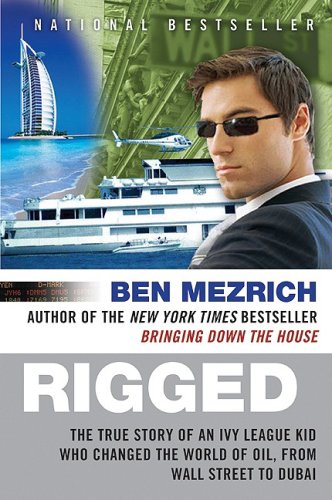