A 17 year old Mormon girl, named Pattyn Von Stratten lives in a strict household and is the oldest of seven girls. Pattyn has grown up with an abusive alcoholic father and a mother who believes she needs to have as many children as possible, especially boys to carry on the Von Stratten name. So far, Pattyn’s mother has only had seven girls but has a baby on the way. Growing up as a Mormon, Pattyn has shown throughout the novel, Burned that she disagrees with the lifestyle. All her life she has had to raise her sisters and resented her mother and father. Ellen Hopkins shows a lot of emotion through the novel with Pattyn’s pain and how she wants to escape the Mormon community and her strict, abusive alcoholic father.

Pattyn eventually rebels against her Mormon beliefs and experiments with drinking and starts dating a boy, Derek. Her father catches her with her boyfriend, and tells Derek to never come near Pattyn again. When Pattyn sees her ex-boyfriend with a new girl, out of rage and jealousy, she punches the girl in the face. Shortly after this, she starts talking back to her parents. Pattyn’s father decides to send her away as a punishment to live with Aunt Jeanette in Nevada. Pattyn’s strict lifestyle keeps her from living a normal teenage lifestyle and how hard of a struggle it is to deal with, Ellen Hopkins does a very good showings her protagonist as a very strong girl who isn’t afraid of going against what her community believes of and very admirable.

What was meant for a punishment was actually one of the best things that ever happened to Pattyn. Aunt Jeanette and her instantly had a close bond, and similar stories. Throughout the time being in Nevada, Pattyn learns a lot about herself, about love, life, and that there is more to life than being a Mormon. Ethan, a local boy in town, soon becomes Pattyn’s boyfriend who she spends her whole summer with and falls head over heels in love with. The young love relationship that is supposed to be forbidden is very strong throughout the novel Burned. After a few months, Pattyn finds out her younger sister is being beaten by her father, and she doesn’t know what to do. Pattyn’s father wants her home, so at the end of the summer she went back to living her Mormon lifestyle with her alcoholic father, pregnant mother, and taking care of all of her sisters. Pattyn soon finds out she is also pregnant with Ethan’s baby who is now back at college at UC Davis. Pattyn is worried and confused and doesn’t know whom to turn to. She instantly calls Ethan who says he’ll come to her and they can figure out what to do. This is the beginning of a series of events that change Pattyn’s life durastically.

What will Pattyn’s father do if he finds out? What will happen with their relationship with Ethan being far away? Will they become a happy family?
The big theme of Burned is how dealing with abuse and a strict religious family can either make you stronger as a person or destroy you. Pattyn became stronger but at the end of the book things start to take a turn for the worse. The novelist Ellen Hopkins uses a unique type of writing style, she writes in a poetry, verse style which makes you understand what the characters are going through and more interesting. Pattyn rebelling against her family, the forbidden love relationships, and Pattyn’s undecisive idea of being a family with Ethan and making it work, makes Ellen Hopkin’s Burned, a book you’ll never want to put down. 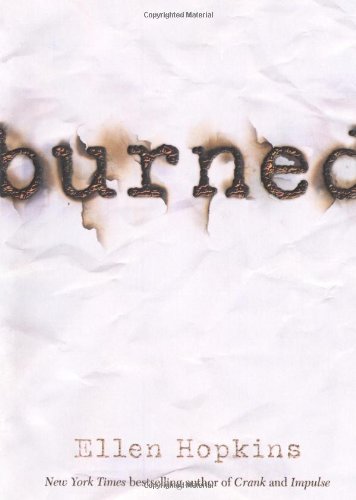