Though he is best known for his beloved science-fiction works and the novel Dandelion Wine is entirely devoid of Martian landscapes or futuristic commentary, it is unmistakably a work of Ray Bradbury. The love and richness of his description, the fantastic wisdom of the individual tales, could all have sprung from the pen of only one man. The novels semi-autobiographical nature means it is especially moving and sincere.

The novel is set in the summer of 1928 viewed through the lens of twelve year old Douglas Spaulding, a boy at the edge of manhood. Already possessing some of Bradbury’s daydreaming philosopher’s eye, Douglas determines the summer holds many messages of life and seeks to document them all, through a chart he and his brother write as the summer progresses, through the dandelion wine his grandfather makes, and through his own reflections on events. The novel begins with Douglas’ realization that he is, in fact, alive, and a pledge to embrace and enjoy it. While this may seem silly when written by another writer, Bradbury portrays the young boy’s enlightenment with such conviction the reader cannot help but feel it too.

Indeed what separates this from the average coming-of-age type of novel is two things. First, Bradbury’s closeness with the material means even the most fantastical elements feel startlingly real and are painted with such beauty the reader truly believes every word. Secondly, Douglas discovers life not through any epic quest or life-changing events but merely through the small things that make a person and the meanings they carry.

Like many Bradbury novels, there are sprinklings of fantasy and magic. Indeed the novel reads in parts like a childhood dream, in others a nostalgic reflection on youth. Here Douglas learns the harsh truth of mortality and discovers that all things, including him, must wither and die. The older characters in the book embrace their fates and depart their wisdom with those wise enough to listen but still young enough to need to. Bradbury masterly paints stories taking place around Douglas involving characters he or his brother meets. This enables the author to view the summer through others, showing what love and youth and the passage of time means to young men and old women of the idyllic Green Town, Illinois.

There is a genuinely spooky element afoot as well. A serial killer stalks the shadows of the ravine, claiming beautiful young women as his victims. Douglas and his brother Tom form wild theories about a wax fortune teller as Doug tries to understand his own mortality. There are accidents as new technology is fumbled with, happiness is sought, and illness and age claims its victims. And yet the novel is never sad or mournful, merely tragic, finding the beauty in the sorrowful things as well as the simple and joyful aspects of youth.

Like many Bradbury novels, it’s a hard thing to define. It is a piece of historical nostalgia, but its point is not to preach the values of simpler lives, or even to recall the wonders of childhood. There are wonders aplenty within the pages, but one doesn’t need to be young to appreciate them. One nearly needs to realize that they, like Douglas, are alive, and in hard times and good it’s something to be celebrated. 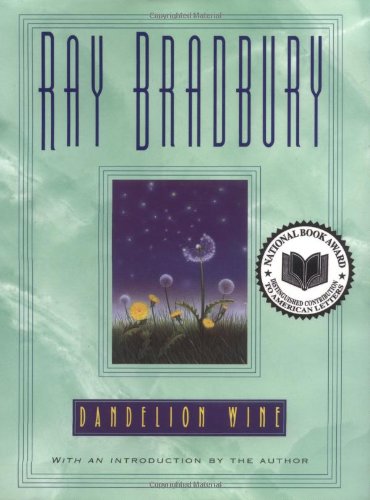